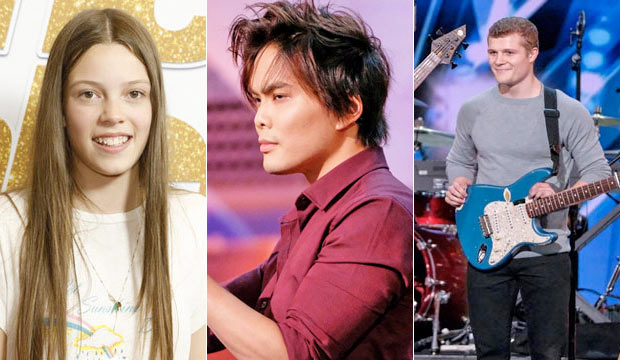 According to exclusive Gold Derby predictions, the winner of “America’s Got Talent” 2018 will be a teenage singer, a close-up magician or a sibling band. Thirteen-year-old singer Courtney Hadwin leads our predictions with 10/11 odds, followed by illusionist Shin Lim with 9/2 odds, and then rock band We Three with 11/1 odds. Do you agree or disagree with our readers’ picks? There’s still time to make your predictions for the chance to win a $100 Amazon gift card.

Courtney Hadwin is by far the most popular “AGT” act of Season 13, amassing hundreds of millions of views on social media. For her initial audition the talented tyke performed “Hard to Handle” and impressed judge Howie Mandel so much that he pressed his Golden Buzzer. Courtney was sent straight through to the live shows, where she blew the roof off the Dolby Theatre with her cover of “Papa’s Got a Brand New Bag.” The judges and studio audience gave her a rousing standing ovation and she easily advanced to the Semifinals.

Shin Lim’s intimate card tricks continue to wow the judges each week, with Howie memorable raving back in his original audition, “That is the best sleight of hand I have ever seen.” When Shin returned in the Judge Cuts round, he performed a spectacular illusion involving making the four Aces appear and disappear at will. He was last seen in the live Quarterfinals, where he earned this bit of constructive criticism from head judge Simon Cowell: “I think moving forward we have to move away from the cards. We need more of a performance.”

We Three’s audition song was an original that they wrote as a tribute to their mother, and judge Mel B revealed that she was “shaking” because it touched her so much. “Lifeline” was the original song they performed in the Judge Cuts, with guest judge Martina McBridge praising their songwriting skills, saying, “That was one of the best first lines I’ve ever heard.” Last week they received negative marks from Simon when he called them a “support band,” but they still sailed through to the next round thanks to America’s vote.

Here’s how Gold Derby readers rank the Top 6 acts of “Americas Got Talent” Season 13: Courtney is first at 10/11 odds, Shin is second at 9/2 odds, We Three is third at 11/1 odds, singer Glennis Grace is fourth at 16/1 odds, comedian Samuel J. Comroe is fifth at 25/1 odds, and comedian Vicki Barbolak is sixth at 28/1 odds. Do you agree or disagree with these rankings?