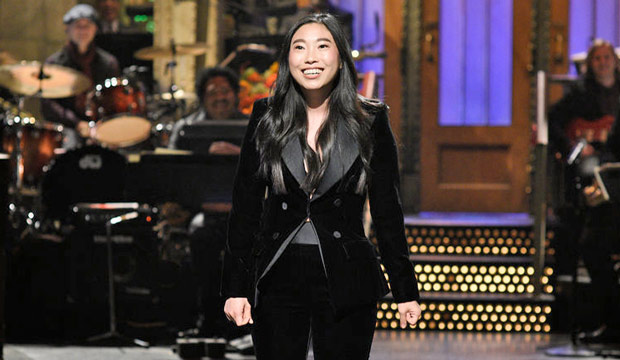 “Crazy Rich Asians” scene-stealer Awkwafina made her “Saturday Night Live” debut on October 6 and paid tribute to one of her personal heroes, Lucy Liu, during her emotional monologue. Awkwafina was joined by musical guest Travis Scott, who was also appearing for the first time on NBC’s long-running, Emmy-winning late night staple. Besides “Crazy Rich Asians,” Awkwafina also starred in the summer blockbuster “Ocean’s Eight.”

“Before we start, I just want to say — and this is a true story — back in 2000 I came here to 30 Rock and waited outside when my idol Lucy Liu hosted ‘SNL,'” Awkwafina said at the end of her monologue after jokes about being a “Rebuilding-My-Credit Asian” and growing up in Queens. “I was a kid and I didn’t have a ticket so I knew I wasn’t getting in, but I just wanted to be near the building.”

The rapper and actress continued, “I remember how important that episode was for me and how it totally changed what I thought was possible for an Asian-American woman. Standing here tonight is a dream I never thought would come true. So thank you Lucy for opening the door. I wasn’t able to make it in the building back then, but 18 years later I’m hosting the show. I love you, Lucy Liu! Be my friend!”

SEEEmmy Awards 2018: ‘Game of Thrones’ is the year’s biggest winner with 9, followed by ‘Maisel’ and ‘SNL’ with 8 apiece

Awkwafina also took a swipe at Kanye West during her opener, saying that she was going to come out dressed as a water bottle, but “apparently someone did that last week.” That was a reference to West’s performance of “I Love It” in the “SNL” Season 44 premiere in which he and Lil Pump dressed up as a Perrier bottle and a Fiji bottle, respectively.

“Saturday Night Live” is coming off one of its best years ever at the Emmy Awards, winning Best Variety Sketch Series for the second year in a row and extending its all-time record haul to 72, the most of any program. Among the show’s many trophies this year, Tiffany Haddish took home Best Comedy Guest Actress and Don Roy King ran off with Best Variety Directing.