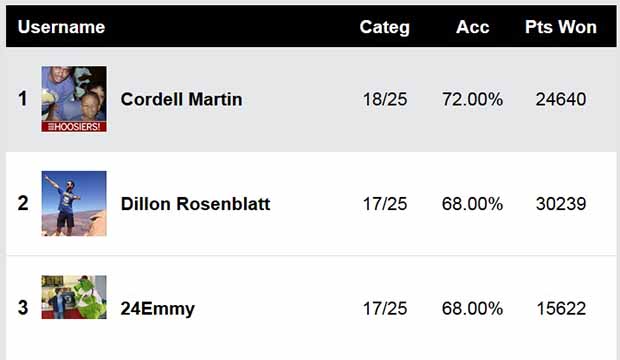 Congratulations to our User Cordell Martin for an outstanding score of 72% when predicting the 2018 Creative Arts Emmy Awards winners over the weekend. He is just ahead of a large group of people with 68% correct and has a great point score total of 24,640 by using the 500 super bets wisely.

Almost 900 people worldwide predicted these champs in 25 categories. The awards ceremony was held on Saturday, September 8, and Sunday, September 9, in downtown Los Angeles. Our top scorer got several top categories correct, including Katt Williams (“Atlanta”), Tiffany Haddish (“Saturday Night Live”) and Ron Cephas Jones (“This Is Us”) in the guest acting categories. He did miss out on the drama guest acting race by predicting Viola Davis (“Scandal”) over Samira Wiley (“The Handmaid’s Tale”).

Among our nine Editors, Rob Licuria is best with 68%. Marcus Dixon is in second place with 64%. We then have Joyce Eng, and Paul Sheehan at 56%.  Daniel Montgomery, Tom O’Neil and Susan Wloszzyna tied in the next position with 52%. Matt Noble follows with 48% and then me with 44%. See Editors’ leaderboard.