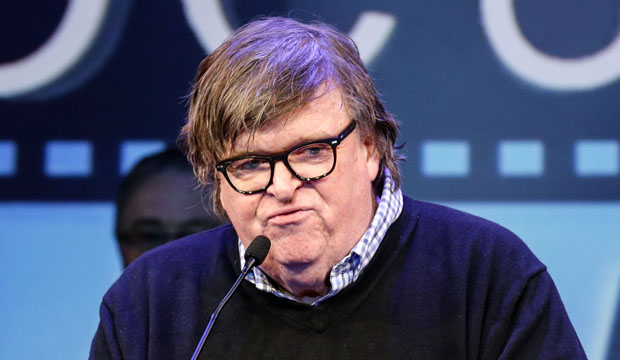 Michael Moore was “in awe” of Robert DeNiro. Get in line, pal. And of the members of the Broadcast Film Critics Association on hand, Neil Rosen had laryngitis (his wife looked relieved). Steve Oldfield was pitching his second documentary, Mike Sargent was an hour late, his date was not. And Jeffery Wells (Hollywood Elsewhere) had a better seat than I did. He’s in the second row. I’m way in the back balcony control booth as the evening’s announcer.

The third annual Critic’s Choice Awards came back to the low-key Brooklyn setting, BRIC, and the show was a “well-organized, briskly paced — by any measure an agreeable, fraternal family affair,” according to Wells. I think most would agree.

Here are some of the highlights on and off stage.

DeNiro was there to give the “Fahrenheit 11/9” director a Lifetime Achievement Award. “He’s on ‘Saturday Night Live’ tonight and came across the river for this,” Moore said of DeNiro.

The timing was admittedly tight. DeNiro’s speech was around 7:15 p.m. and he had to be back and in full Robert Mueller makeup by the 8:30 p.m. rehearsal. He made it. But not before unleashing a tirade about the rotund documentarian.

“I’ve never met anyone who wastes more time than Michael Moore,” he fumed. “When I want to say something, I say it. When Michael has something to say’ he takes six months, or a year or three and makes a whole goddamn documentary about it.”

The amusing rant continued: “He doesn’t give a shit about how long it takes. ‘Bowling for Columbine’ 2 hours. ‘Fahrenheit 9/11’ over two hours. ‘Sicko’ 2 hours 3 minutes. And his latest, ‘Fahrenheit 11/9′ the Trump movie? 2 hours 8 minutes. My public performance on Trump at the Tonys? About 30 seconds.”

DeNiro shifted gears to praise Moore’s “nose for hypocrisy and when he sniffs it out, he has the righteous warrior’s strength to smash it.”

Moore took to the stage and thanked DeNiro for “being a great truth teller.” He then went on to finish the Oscar speech from 2003 he wrote for his “Bowling for Columbine” win. Remember the literal mic drop? They mechanically pulled it to the stage floor halting his Bush screed.

“Fifteen years later now tonight, we are not only still at war, but we have a president who has declared war on our democracy and war on us,” Moore said. “Keep picking up those cameras, everyone here in this room, because the people gathered here tonight, you may be America’s last line of defense and hopefully the first line of rebuilding this country that he is currently destroying.”

Moore described what happened at the Oscars ceremony after his speech: “Backstage they have two people who greet you when you come off. One says, ‘Champagne?’ and the other says, ‘Breath mint?’ Well I had a third guy come over, a stage hand, who yelled in my ear, ‘ASSHOLE!'” Moore confided.

The crowd gave Moore and DeNiro standing ovations. Host Bill Nye was wondering off stage: “How am I gonna follow that?”

Star power. He brought Matt Dillon up to give out the next award. In fact, the event dubbed “The year of the documentary” by board member John DiSimeo earlier in the evening and echoed by President Joey Berlin for “being a real Oscar predictor” drew a few more big names. For the last two years the converted warehouse event was attended mostly by filmmakers. This year we had DeNiro, Moore, Dillon, Natasha Lyonne and Rashida Jones. OK, it’s not the Oscars, but this is Brooklyn.

And the momentum for this show is clearly growing. At the run-through after reading that mention of “year of the documentary” host Bill Nye adlibs, “What are they gonna do next year?” Stage hands laugh. It gets added to the script. Jones, who co-directed a winning doc on her dad Quincy said, “When I showed him the film he was crying and said, ‘I wish I could live forever.’ I know he will in this film.”

As reported elsewhere, “Won’t You Be My Neighbor?” and “Free Solo” were the big winners. “Free Solo” Xanax-inducing Alex Honnold is this year’s deer in the headlights. It’s charming, but he doesn’t care about being a star.

“I just got pushed up here,” he said about his stint as an award presenter. If this night is any indicator, he’s got a lot more awards shows to scale.

I asked co-director Elizabeth Chai Vasarhelyi if Honnold was married yet. In the film he moves in with his girlfriend. Something that seems scarier to him than climbing El Capitan. “No he’s not, you should ask him about that. Go ask him.” I tried but he and her husband Jimmy Chin were busy carrying too many awards out of the building.

Also on the way out, everyone with a cause was stopping Michael Moore with their pitch. He is gracious. I take a few pictures of people with him for fans with their cellphones.

“He’s the man,” gushes a young African American woman. I grab her phone. She gets a photo. Me, I lost my cellphone. Mike Sargent found it under a table after I left and took it home. We’re supposed to meet up today so I can get it back. I’ll add an hour to whatever time he tells me.