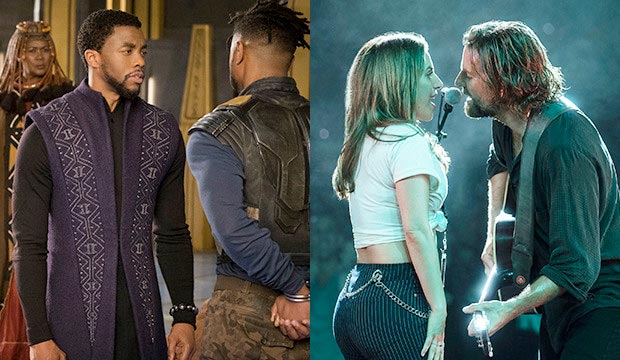 The Critics’ Choice Award nominations announced on Monday (Dec. 10) follow on the heels of the Golden Globe ones last Thursday.  The Broadcast Film Critics Assn. tout these awards as the most accurate preview of the Oscar nominations. They achieve this stellar success rate by nominating a full 10 films for Best Picture (the Oscars have between 5 and 10) as well as six or seven contenders in the acting and directing races (the academy allows only five slots per category). With that stat in mind, we take a closer look at the nominations in the analysis below to see which films are up, down and about the same in the race for the Academy Awards.

SEE Critics’ Choice Awards 2019: ‘The Favourite’ is just that with 14 nominations but watch out for ‘Black Panther’

“Black Panther” — After making history as the first comic book movie to reap a bid for Best Drama at the Globes, it did marvellously well with the broadcast film critics, reaping a whopping 12 nominations. Ten of those are in races that have equivalents at the Oscars. Among these are a supporting acting bid by Michael B. Jordan and another for the adapted screenplay.

“The Favourite” — Yorgos Lanthimos‘ period piece leads with 14 nominations, including Best Picture and for all three women at the center of the story (leading lady Olivia Colman and supporting players Emma Stone and Rachel Weisz). After being snubbed by the HFPA, Lanthimos is in the running here for Best Director.

“First Man” — This biopic of astronaut Neil Armstrong failed to lift off at the Globes, earning just two nominations for featured actress Claire Foy and score. The Critics’ Choice gave it a big boost with 10 nominations, including Best Picture, Director (Damien Chazelle) and for leading man Ryan Gosling.

“A Star is Born” — It ties with “The Favourite” as the film with the most acting nominations. As expected Lady Gaga and Bradley Cooper reaped leading bids. And Sam Elliott, who was snubbed by the Globes, contends in supporting. Cooper is also cited for his directing and writing.

“Green Book” — Following its warm reception from the Hollywood foreign press, this period charmer did just as well with the BFCA. Besides the expected bids for Best Picture, leading man Viggo Mortensen and supporting player Mahershala Ali, it also earned recognition for director Peter Farrelly (who got in over “Beale Street” helmer Barry Jenkins) and the script.

“Roma” – Coming off a weekend when it won Best Picture from five regional critics groups. Alfonso Cuaron‘s intimate memoir earned eight nominations, including one for film newcomer Yalitza Aparicio. Cuaron accounts for half of that haul as he contends for directing, screenplay, cinematography and film editing.

“Vice” – After leading the Golden Globes, Adam McKay‘s satirical biopic of Vice President Dick Cheney earned nine nominations here. McKay reaped bids for both writing and directing and both Christian Bale and Amy Adams contend here as they do at the Globes. But the critics passed on the scene stealing supporting performance of Sam Rockwell.

“If Beale Street Could Talk” — We thought that the critics would embrace Barry Jenkins‘s follow-up to his Oscar-winning “Moonlight” even more. While they gave it five nominations, including Best Picture, Jenkins was left out of the line-up for Best Director despite there being seven slots.

“Widows” — Steve McQueen’s crime thriller was robbed, with just one nomination in a category with an Oscar equivalent (editing). Its other two bids are for Best Ensemble and Best Action Movie