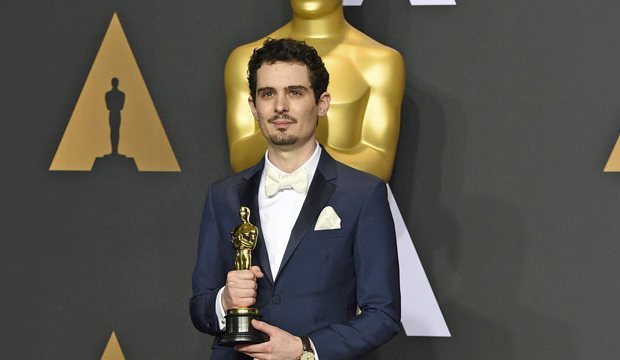 Even at just 33, Damien Chazelle is an old hand at selling a movie. He’d rather make them than market them, but he understands the importance. “It’s the other half of the process and it’s the half I’m much less comfortable with or equipped to do,” he revealed before a Hamptons International Film Festival event showcasing his new film “First Man.” “I never feel entirely at ease during it. But certain fun things come out of it, I mean it’s always exciting once you’ve worked on a movie and you’ve been in a little bubble for years to finally share it with the world. And to ’emerge from the cave’ so to speak to get to meet up with other filmmakers I admire at festivals and during the award season is kinda fun.”

Chazelle says he understands the importance of separating his writing, directing and editing from campaigning. “I think I’m getting better and better at compartmentalizing and not allowing myself to get inundated so you try to just focus on the work itself. And it’s something I’ve gotten better at hopefully.” Later during the one hour chat with critic Josh Rothkopf, he revealed that despite the infamous mix up on stage at the 2017 Oscars, he “did the normal” things afterwards. “You go the Governor’s Ball, my parents were in town and they wanted to see the Oscar” (that he’d won for directing “La La Land.”)

It wasn’t until the next day that things got a little weirder. “I actually got to meet up with Barry Jenkins the morning after and both of us were looking at each other like people who had just emerged from prison. And we both had this gleam in our amidst the fatigue that now we get to go back to what we actually like to do which is making movies.” For Chazelle that was turning Ryan Gosling into Neil Armstrong.

He knew people were familiar with the Apollo 11 mission, but that only made it a greater and more rewarding challenge. The trick he said was to “find a way to tell a success story that’s all about failure. Not about what was gained but what was lost–on the human level. Who died along the way and what that actually meant to those families.” Chazelle said the James Hansen book showed him these guys weren’t “haloed super heroes who were doing this kind of as they were rolling out of bed. I realized I had personally taken it for granted.” And he’s not a space geek. “I didn’t grow up obsessed with space,” he told the audience. “I didn’t want to be an astronaut. I wanted to show the process.”

Rothkopf gave Chazelle a chance to settle once and for all the decision to not show Armstrong planting the flag on the moon. “Art is an inherently political act. But there is a distinction beneath that as to certain choices,” he began. “That wasn’t a political decision and I hope anyone who sees the movie knows there’s nothing political about it. The moonwalk is only eight minutes. This is about the eight years that led up to it, but in terms of that moonwalk I felt a responsibility to show people things they hadn’t seen.”

Another thing most people haven’t seen is much of Neil Armstrong. “Neil wouldn’t do interviews, wouldn’t give autographs, wouldn’t talk about that part of his life. He would go to events. He would give speeches. He wasn’t a complete recluse that some people thought he was. But he was such a private man that many of his fellow astronauts didn’t even know he had a daughter. That’s how closely guarded he was about most of his life.”