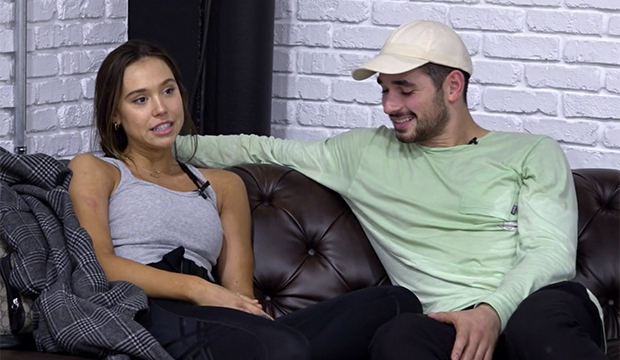 Far be it from us to dismiss a love connection, but whatever it is between Alexis Ren and Alan Bersten that “Dancing with the Stars” is shoving down our throats is a huge turnoff. Actually, we know what it is: a showmance, and a terrible one at that. It came out of nowhere last week in their rehearsal package and it went into overdrive on Monday when Ren said in a talking head that she’s “developing feelings” for him.

“It’s so much fun to dance with someone you have a connection with. it’s almost like time slows down. We communicate not just through our steps and our movements, but with our hearts too,” she said. “I am developing feelings for Alan. And I didn’t see this one coming. But it happened really quickly though, so I think I’m still trying to process it.”

Cut to cameras not-so surreptitiously filming her addressing the “elephant in the room” (is it though?) with him. “We have chemistry,” she said. “And so I just needed to point that out.”

SEE ‘Dancing with the Stars’: Love was in the air for Alexis and Alan on Halloween, but could their showmance backfire? [WATCH]

The best part of all this is Bersten’s non-committal responses to her, merely agreeing that they have chemistry, and in his talking head. “Sitting next to Alexis on the couch and her telling me how she feels, my emotions were all over the place. You know, it was a lot to take in,” he said. “I want to be 100 percent certain before I tell her how I’m feeling. I have a lot to think about.”

He was equally evasive when Erin Andrews futilely tried to get something out of him following their 27-scoring jazz. “You know, honestly, I’m having so much fun,” he said. “Only time will tell.”

If this was unscripted from Bersten, then props for not playing along. Look, they may very well have feelings for each other, but they’re distorted, heightened feelings for now. This tends to happen when you practically spend 24/7 with each other, all up in each other’s personal space, grabbing each other’s arms and backs and legs, and contorting each other’s bodies. It’s natural. And it might not be real when you step away from the show and back into the real world.

What’s not natural is how the show is desperately trying to convince us this is legit. A showmance is not necessarily a bad thing, but it needs to be organic, like Robert Herjevac and Kym Johnson. Nothing has ever been more phony and more painfully forced than with this one. Cameras creeping in the doorway to film their conversation? Ren not wanting to talk about it with Andrews after supplying TPTB with endless content for their package? So subtle, guys.

Why is the show going all in on a showmance no one is shipping? Well, it seems to want Ren to last as long as possible. The problem for the Sports Illustrated model is that she lacks a voting fan base, and we can assume she hasn’t built one, or much of one, so far this season despite her clear skill and good performances. With the cast getting smaller and since the women are getting decimated this season, they need to pull out the stops now for her. Cue showmance. Cue two straight weeks “in jeopardy.” Ren and her boyfriend, Sky Bear, just so happened to have split up a few weeks ago as well. We’re not going to say this was a fake breakup, especially since Ren confirmed she’s moving back to L.A. from Hawaii, where she had been living with her ex, but it’s interesting timing indeed.

The ironic thing is that even if Ren hadn’t been pulling in votes before, she was still a nice, inoffensive presence on the show. But this insipid showmance is now inspiring more hate than anything else.