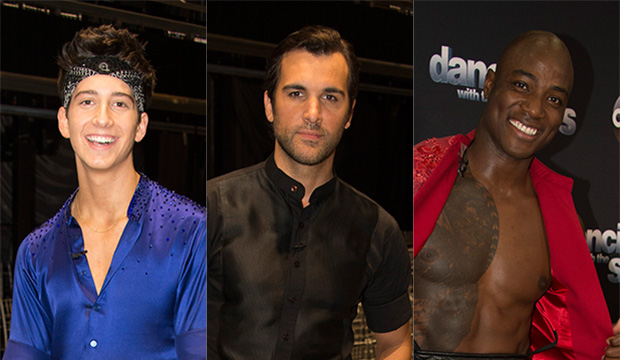 It’s a man’s world on “Dancing with the Stars” this season — and it will continue all the way to the finale, our readers believe. In a recent poll, 54 percent think we’ll have an all-male final three for just the second time ever.

A man has yet to be eliminated this season, so the numbers are definitely in the guys’ favor. Milo Manheim, Juan Pablo Di Pace and DeMarcus Ware are far and away the best male contestants, owning three of the top five highest average scores so far. Di Pace also received the first perfect score of the season two weeks ago. They would join Season 3 winner Emmitt Smith, runner-up Mario Lopez and third-place finisher Joey Lawrence as the only all-male final threes in the show’s history.

SEE Will Grocery Store Joe ever crack 20 points on ‘Dancing with the Stars’?

But 41 percent think only two guys will make it and 5 percent are betting on only one man left standing. Thanks to the early slaughter, there are only three women left — Evanna Lynch, Alexis Ren and Mary Lou Retton — and two of them, Ren and Retton, were in the bottom five the first week. Of these three, who has the best chance of crashing the sausage fest? Lynch was in fourth place in our odds last week, but she’s in first in our early odds for Week 6, ahead of Di Pace, Manheim and Ware. Ren, who was place in jeopardy in this week’s non-elimination with Ware, is currently in fifth and Retton is in seventh.

But technically, there is actually a final five this season. Carrie Ann Inaba revealed on Instagram that five couples will go into the first night of the finale, which will end with a double elimination, sending three couples into the second night. So unless Joe “Grocery Store Joe” Amabile and Bobby Bones hang on by the skin of their teeth, there will probably be at least one woman in the final five.