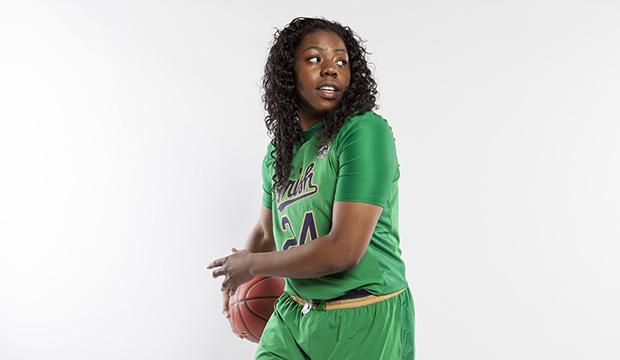 The University of Notre Dame

You’ll be seeing a lot of the “Dancing with the Stars: Athletes” contestants over the next couple of weeks — except for one. Notre Dame basketball star Arike Ogunbowale is prohibited from doing any promotional work for the show if she wants to maintain her NCAA eligibility.

The NCAA’s (very archaic) rules forbid college athletes from making money off their likeness. In order for Ogunbowale, a junior and the first college athlete to do “Dancing,” to hit the hardwood, the NCAA membership committee “provided direction allowing for Notre Dame’s Arike Ogunbowale to participate on this season of ‘Dancing with the Stars,’” Emily James, the NCAA’s associate director of public relations, told “USA Today.”

That means no ads or commercial work for Ogunbowale, because that would be promoting her likeness, and the Fighting Irish cannot endorse her on “Dancing” outside of the fact that she is on the show. This would explain why Ogunbowale and her partner Gleb Savchenko don’t have official couple portraits like the rest of the cast; Ogunbowale does have two solo press photos that were provided to ABC by Notre Dame. It also explains why “Dancing” used a still photo of her in its first sizzle ad while the other nine stars filmed the promo.

Get ready for the most competitive season yet. Meet the celebrities of #DWTS: Athletes! pic.twitter.com/mrev2CO7EL

This might be a huge blow to her Mirrorball trophy hopes. Ogunbowale became a Notre Dame hero two weeks ago, but she is arguably the least known of the participating athletes. “Dancing” history has shown that being a “who?” when the show begins isn’t a death knell if you have some dance ability, personality and the fan votes — the latter of which comes from getting you face in other people’s faces and encouraging fans to vote. While the other nine couples have been posting photos and videos of their rehearsals on social media the past few days, Ogunbowale’s and Savchenko’s social media channels have been muted outside of the initial announcement that she’s doing the show. And Ogunbowale didn’t even compose an original tweet herself announcing that; she cautiously retweeted Notre Dame’s tweet about it. The four-week-long season and double eliminations every week also don’t help her. But maybe now that people know about her restrictions they’ll preemptively vote for her?

The good news for Ogunbowale, who hit buzzer beaters in the women’s NCAA semifinal and final, is that she can keep whatever money she earns on “Dancing,” because according to James, that would be for her dancing achievements, not her “basketball abilities.”

Do you think Ogunbowale is at a severe disadvantage? Vote below!