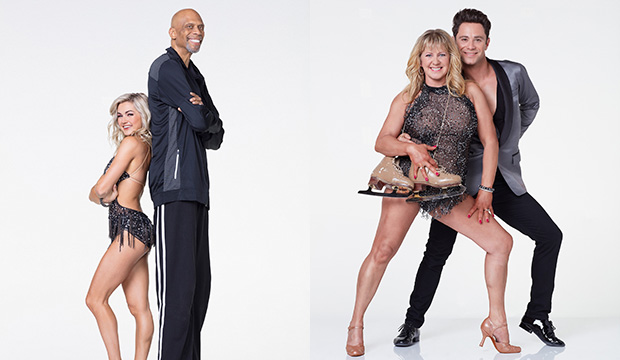 The “Dancing with the Stars: Athletes” cast is finally out — and we have thoughts. We’ve got six Olympians on deck — including three figure skaters — two basketball players, a baseball player and your requisite football player. It’s anyone’s game (pun intended) — or is it? Some of these folks have some obvious and not-so-obvious advantages over the others and in a shortened four-week season, that could mean a lot. So before anyone takes their first dance, let’s take a closer look at the cast.

Adam Rippon and Jenna Johnson
The breakout star of the Pyeongchang Olympics, Rippon has wit and personality for days, and will be soundbite gold for producers. Unlike his quad-happy rivals on the ice, the figure skater favors artistry over jumps (he didn’t do a single quad at the Olympics), so he should be able to translate that musicality onto the hardwood like skating “Dancing” champs Kristi Yamaguchi and Meryl Davis. Look for him not to crumple at any wardrobe malfunctions — because they’re wardrobe opportunities. We are also highly looking forward to him dramatically saying “Tom” before answering a question. It’s too bad “Dancing” didn’t get Lacey Schwimmer back because her brother, “So You Can Think You Can Dance” alum Benji Schwimmer, has choreographed Rippon’s figure skating routines, including a Rihanna exhibition number that he should definitely adapt for the dance floor. And remember, even if Rippon is not the best dancer, he’ll be the most fun.

“I might not be the best, but I’m the most fun.” Same, @Adaripp, same #Olympics pic.twitter.com/lYgvj0FZTK

Arike Ogunbowale and Gleb Savchenko
The Notre Dame hero hit two buzzer beaters to beat the undefeated UConn Huskies in the women’s NCAA final four and then in the final against Mississippi State earlier this month, so her life has been a whirlwind since then. If the press photos are any indication, she and Savchenko couldn’t even make the couples photo shoot together, so her post-victory lap tour is packed. A missed photo shoot obviously isn’t as important as a missed rehearsal, but it means they’re on a tight schedule. Ogunbowale is the first female basketball player in the show’s history, so there’s no data on how they’ve done.

Chris Mazdzer and Witney Carson
Luge is one of those sports people only care about when the Olympics roll around; it’s irrelevant in determining the general public’s awareness of Mazdzer. (Do you know any A-list lugers?) But Mazdzer, whose silver in men’s single luge in Pyeongchang was the first medal in the event in U.S. history, is a good-looking, fun-loving guy who can definitely win over fans if he’s remotely decent. There’s definitely a path for him a la James Hinchcliffe, another niche sport athlete who went all the way to the final two. Mazdzer can also eat a slice of pizza in a single bite.

Jamie Anderson and Artem Chigvintsev
If you follow snowboarding, you know that Anderson is super chill (like most snowboarders) and goofy off her board, but she’s ruthless once she starts spinning in the air. We can see her deploying that tactic on the floor — people might underestimate her because of her lack of intensity, but she’s in the for kill. Anderson, who became the first female snowboarder to win two golds with her slopestyle title defense in Pyeongchang (she also won a silver in big air), is the third snowboarder to compete. Louie Vito was eighth on Season 9 and Paralympian Amy Purdy was second on Season 18.

SEE ‘Dancing with the Stars: Athletes’: See the 10 athletes

Jennie Finch Daigle and Keo Motsepe
The Olympic champion softball great is 6 feet, 1 inch tall, which could be a blessing and a curse depending on how she takes to all those steps. But honestly, we just hope Motsepe has a true contender here. He deserves it. He’s been eliminated within the first three weeks in five of his six seasons, his best placement being sixth place with Jodie Sweetin on Season 22.

Johnny Damon and Emma Slater
Damon is only the second baseball player in the show’s history following David Ross, who was runner-up on Season 24 despite not being great. Damon could mirror Ross’ run. Both won two World Series title with two different teams: Ross with the Boston Red Sox and the Chicago Cubs; Damon, the Red Sox and the New York Yankees. Yeah, the Red Sox and Yankees are bitter rivals, but both have passionate fan bases, and as we saw with Ross (and plenty of other people), that can go a very long way on “Dancing.”

Josh Norman and Sharna Burgess
You’d be a fool to underestimate any football player. The Washington Redskins cornerback is the 20th football player to compete on “Dancing” and is seeking to be the fifth to win. He’s not a household name like Emmitt Smith or Hines Ward, but he could Rashad Jennings his way to the Mirrorball. Burgess has also come close to a victory, with Nick Carter and Hinchcliffe, so perhaps someone from “Dancing”’s most fruitful sport can do it for her.

Kareem Abdul-Jabbar and Lindsay Arnold
I mean, their photo brings all the LOLs. The basketball legend is 7-foot-2; the reigning “Dancing” champ is 5-foot-6. All their dances will be must-watches. We’re gonna go out on a limb here and say basketball won’t have its first “Dancing” winner. Abdul-Jabbar is the fifth NBA player to compete, none of whom finished better than sixth place (Rick Fox, Season 11).

SEE ‘Dancing with the Stars: Athletes’: Who is the early frontrunner to win? [POLL]

Mirai Nagasu and Alan Bersten
Dreams do come true! Nagasu had been lobbying for a “Dancing” spot before her Olympics were even over, so thankfully ABC tapped her. Plus, it’d be awkward if they had picked her BFF Rippon and not her. Like Rippon, she has a ton of personality and she also wears her heart on her sleeve, which will surely draw in fans on a show that is all about “journeys.” Nagasu has a redemptive journey that is perfect for the Most Memorable Year dance: She was left of the 2014 Olympic team despite finishing third at U.S. Nationals, but pushed herself to make the 2018 team by adding a triple axel — the hardest jump for women — to her repertoire. She finished second at the 2018 Nationals, made the Olympics and became the third woman — and first American woman — to land a triple axel at the Olympics. She and Rippon will be pulling double duty on “Dancing” and the “Stars on Ice” tour, but tons of former contestants have kept full schedules with travel commitments while on the show.

Tonya Harding and Sasha Farber
Speaking of triple axels, Harding was the first American woman and second woman overall after Japan’s Midori Ito to land it in competition — at 1991 Skate America — so we’re gonna have a triple axel queen showdown on the dance floor. The infamous figure skater is obviously the lightning rod contestant of the season. ABC is already carefully framing the 1994 attack on Nancy Kerrigan in Harding’s “Dancing” narrative — her show bio euphemistically calls it “a scandal” that derailed Harding’s skating career and Olympic dreams, without mentioning Kerrigan’s name. We definitely need to keep count of how many times Kerrigan’s name is actually mentioned on the show. Remember when Elisabetta Canalis was on Season 13 and talked around her relationship with George Clooney without ever saying his name? That could happen here. Kerrigan, of course, finished tied in sixth with Nick Viall on Season 24, so there’s already a built-in “Will Tonya do better than Nancy?” arc. If producers were truly devilish, they would’ve paired Harding with Chigvintsev, Kerrigan’s partner. But perhaps knowing how controversial Harding is, they gave her Farber, who is beyond adorable and sweet, and has an aww-worthy “Dancing” arc himself: He proposed to Slater on the show and they just got married last month. You know “Dancing” will also try to bring in the big guns for Harding: “I, Tonya” stars Margot Robbie and Allison Janney could attend to cheer her on or at the very least film a talking head about her.