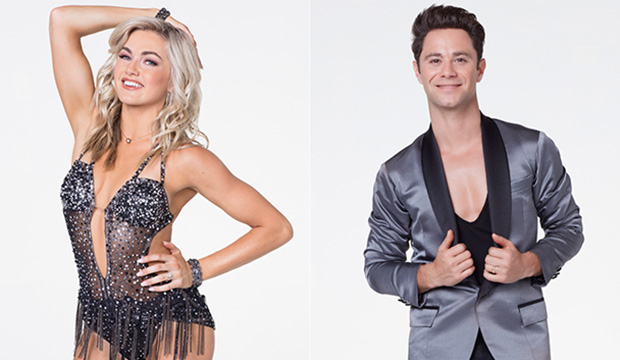 You still have to wait until Friday for the contestants, but “Dancing with the Stars: Athletes” has announced the full list of pros in an Instagram post Thursday. Unsurprisingly, the 10 pros are split evenly between men and women.

Our Pros for #DWTS Athletes! 🎉 Tag them below to send congrats and watch @goodmorningamerica tomorrow to find out who they’re partnered with!

And based on their outfits and the show’s previous photo teases, we know now that Slater, who married Farber last month, is definitely partnered with a baseball player; Burgess, with a football player; and Arnold, a basketball player.

SEE ‘Dancing with the Stars: Athletes’ will have a baseball player and (of course) a football player — but who are they?

The only reported athletes so far are Tonya Harding, Adam Rippon, Jamie Alexander and Jennie Finch. By process of elimination, Rippon is paired with either Carson or Johnson. But it’s anybody’s guess who the ladies have.

Of these 10 pros, only Carson, Slater and Arnold have won the Mirrorball trophy; Carson won Season 19 with Alfonso Ribeiro; Slater, Season 24 with Rashad Jennings; and Arnold, last season with Jordan Fisher.

Who do you think is partnered with whom?

The full “Dancing with the Stars: Athletes” cast will be announced Friday on “Good Morning America.” The show premieres Monday, April 30 at 8/7c on ABC.