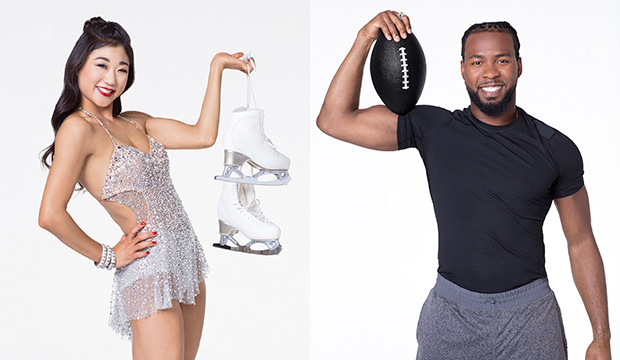 Seven sports are represented by the 10 athletes on “Dancing with the Stars: Athletes,” including some of the show’s staples. But which sport’s athletes have done the best on the show? You can probably guess (cough, football, cough). Let’s look at these seven sports’ “Dancing” histories.

Football (Josh Norman)
As everyone knows, football is by far “Dancing”’s favorite sport. They don’t even try to hide it. Nineteen football players have hoofed it before this season, and while they haven’t all made it to the business end of their respective seasons, football has produced four winners, three runner-ups and two third-place finishers. So, no pressure, Josh, to follow in these pigskin players’ footsteps.

Figure skating (Tonya Harding, Mirai Nagasu and Adam Rippon)
Figure skating is “Dancing”’s second favorite sport, though it’s still well behind football. Before this season, six skaters have competed on the show, yielding Mirrorball champs Kristi Yamaguchi and Meryl Davis. 2010 Olympic champ Evan Lysacek finished second — the first Olympic gold medalist to lose in a “Dancing” final — and Davis’ ice dancing partner Charlie White finished fifth on the same season she won. 1976 Olympic champ Dorothy Hamill withdrew after two dances on Season 16 due to a spinal injury, while two-time Olympic medalist Nancy Kerrigan finished tied in sixth with Nick Viall on Season 24. Since Nagasu and Rippon are younger and are still active skaters, they have a leg up on Harding, who’s 47 and hasn’t competed since she was banned from figure skating more than two decades ago.

Basketball (Kareem Abdul-Jabbar and Arike Ogunbowale)
“Dancing” has only dipped into the basketball well four times prior to this, but none of those b-ballers did very well. Rick Fox holds their best finish in sixth place on Season 11. Metta World Peace was first out in Season 13, Derek Fisher was third out on Season 25 and Clyde Drexler was fourth out on Season 4. World Peace was the only active player to compete, and given Abdul-Jabbar’s age (he turns 71 on Monday) and height (7-foot-2), he might not be long for this competition. Notre Dame star Ogunbowale is the first female basketball player in “Dancing” history.

SEE ‘Dancing with the Stars: Athletes’: See the 10 athletes

Snowboarding (Jamie Anderson)
“Dancing” has featured snowboarders twice before: 2010 Olympian Louie Vito, who finished eighth on Season 9, and Paralympian Amy Purdy, who was second to Davis on Season 18. You’d have to think “Dancing” has tried to woo snowboarding’s biggest rock star, Shaun White, to no avail. Fresh off two medals in Pyeongchang, Anderson is still actively competing, and since snowboarding demands tremendous leg strength, you know she’s in good shape.

Baseball (Johnny Damon)
“Dancing” didn’t have its first and heretofore only slugger contestant until Season 24, with runner-up David Ross. It’s hard to extrapolate much from one example, but Ross not one of the best dancers of the season — he has the sixth highest average score — and rode fan support to the final two. If fans come out for Damon, he could be set.

Softball (Jennie Finch Daigle)
Finch Daigle is the first softball player to hit the parquet. She was a pitcher with a killer arm, so maybe she’ll have some killer arm extensions as well?

Luge (Chris Mazdzer)
Mazdzer is the first luger to try his hand at “Dancing.” Since his sport requires him to speed down a track while lying still on a sled, it’ll be fun to see him actually, you know, move.