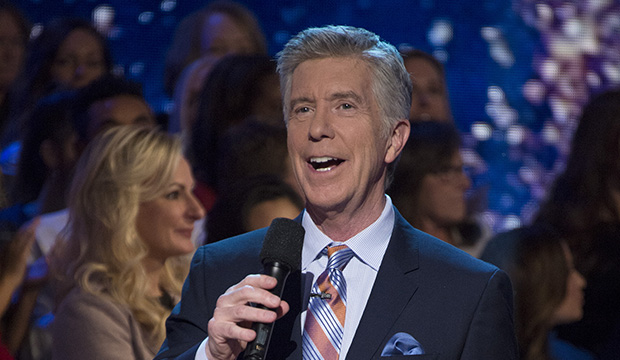 Four Olympians are reportedly in the “Dancing with the Stars: Athletes” cast, which will be announced Friday, but we think there will be a fifth — and we’re pretty sure we know who it is: gymnastics legend Nadia Comaneci. How did we figure this out? With some help from Tom Bergeron.

The “Dancing” host teased the cast on Monday with a seemingly innocuous tweet:

“Going over the lineup for our 4 week, All-Athletes @DancingABC “Seasonette” ahead of Friday’s @GMA. They’re a perfect 10,” he wrote, along with a photo of the three judges, Carrie Ann Inaba, Len Goodman and Bruno Tonioli, each holding perfect scores of 10.

But that winking emoji made us put on our deducing hats. Bergeron, who loves wordplay — on Sunday he confirmed Tonya Harding’s casting with an “I, Tom? Yeah” tweet — added that cheeky face for a reason.

As any gymnastics or Olympics fan — hell, any general sports fan worth their salt — knows, the phrase “perfect 10” is synonymous with one athlete: Comaneci. The Romanian was the first gymnast to earn a perfect score of 10 under the old scoring system, which she accomplished at just 14 years old at the 1976 Summer Olympics in Montreal. Since the score was thought to be unattainable, the official Omega scoreboard wasn’t even programmed to display a “10,” and instead flashed a “1.00” after Comaneci’s uneven bars routine during the team competition. She earned six more perfect 10s that Olympics en route to three gold medals (she won two more golds in 1980).

Comaneci — who’d join Olympic gold medalists Jennie Finch and Jamie Anderson, and Olympic bronze medalist Adam Rippon, in addition to Harding, in the cast — has been somewhat of a white whale for “Dancing.” In 2008, Inaba said she would love to have her on the show, and Comaneci, who was on Season 7 of “Celebrity Apprentice,” said she was down. She’s been rumored to be a contestant before, but presumably scheduling didn’t work out (if that’s an issue, this season’s four weeks would be, uh, perfect). “I would love to be in ‘Dancing with the Stars,'” she told Sports Illustrated in July 2008. “I’ve watched all the seasons and I was even at the taping of the semifinal last season.”

Indeed, the 56-year-old icon has been a longtime fan and audience member, usually dropping by to support her fellow gymnasts, including Nastia Liukin in 2015. She also filmed a package for the show in 2009 discussing what it feels like to get a perfect 10.

Basically what we’re saying is, it was really just a matter of time before Comaneci was on and the time has now (probably) come.

The full cast will be announced Friday on “Good Morning America.”

Do you think Tom Bergeron dropped a huge clue or are we reading way too much into it?