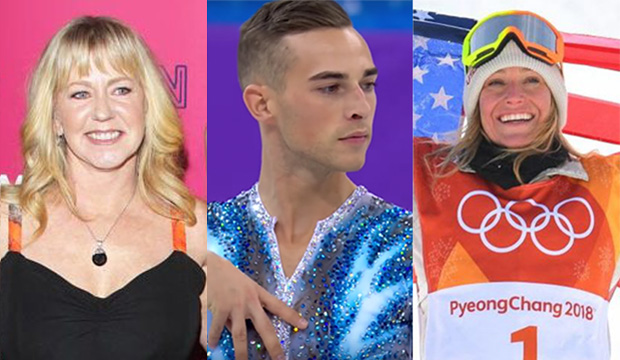 It’s that time of the year again: when “Dancing with the Stars” contestants start to leak before the cast is announced. The first three wannabe hoofers joining the all-athletes season are Olympians Tonya Harding, Adam Rippon and Jamie Anderson, according to Us Weekly.

Harding’s casting is a classic “Dancing” move that checks a lot of boxes: She’s a controversial figure (skater) who was recently thrust back into the spotlight with an Oscar-winning major motion picture, “I, Tonya,” that attempted to engender some sympathy and tell her side of the story in the infamous 1994 attack on Nancy Kerrigan. And “Dancing with the Stars” is nothing if not about redemption. Speaking of Kerrigan, she competed on Season 24, finishing tied in sixth with Nick Viall, and that competitive narrative is a thread “Dancing” wants to pull. “Tonya Harding never won an Olympic medal, but could she surpass the woman whose attack she may or may not have known about for the Mirrorball trophy?”

Rippon’s addition is also hardly surprising. The first openly gay U.S. Winter Olympian, the figure skater was a breakout star in Pyeongchang with his quick wit, mesmerizing skates that earned a team bronze, and that time he refused a meeting with Vice President Mike Pence. He made Reese Witherspoon proud and Sally Field even tried to set him up with her son. Rippon previously played coy when asked if he was doing the show. Of note, his BFF Mirai Nagasu, who’s been lobbying for a “Dancing” spot, is not one of these first three contestants. (Nagasu became the first American woman to land a triple axel at the Olympics, but Harding was the first American woman to land it anywhere — at 1991 Skate America — so we could have two triple axel queens facing off on the dance floor.)

Anderson defended her snowboard slopestyle gold medal in Pyeongchang, becoming the first female snowboarder to win two gold medals. She also won a silver in the inaugural big air competition. Anderson is the third snowboarder to go on “Dancing,” following 2010 Olympian Louie Vito, who finished eighth on Season 9, and three-time Paralympic medalist Amy Purdy, who was runner-up on Season 18.

The entire “Dancing with the Stars: Athletes” cast will be revealed on Friday, April 13 on “Good Morning America.” The show premieres Monday, April 30 at 8/7c on ABC.

Adam Rippon & Meryl Davis are the best athlete winners in 'Dancing with the Stars' history, according to…

Which 'Dancing with the Stars: Athletes' pro deserves an Emmy nomination for choreography…

Just kidding, 'Dancing with the Stars: Athletes' reveals second and third place after all

Who was better on 'Dancing with the Stars': Tonya Harding or Nancy Kerrigan? [POLL]

This is why 'Dancing with the Stars: Athletes' didn't announce second and third place