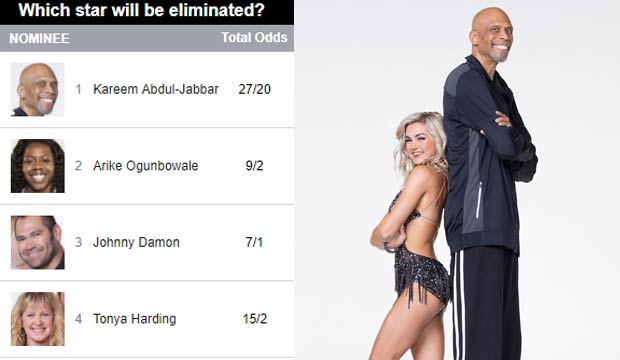 It might not be such a good night for basketball in tonight’s season premiere of “Dancing with the Stars: Athletes.” As of this writing we’re predicting that NBA legend Kareem Abdul-Jabbar and college basketball star Arike Ogunbowale are both front-runners for elimination on the high-stakes first night of competition.

Abdul-Jabbar is the likeliest to be sent packing with leading odds of 27/20 based on the combined forecasts of Gold Derby users. Indeed, there are a few hurdles he’ll need to overcome. At 71-years-old he would be the oldest celeb to win the Mirror Ball Trophy by 20 years (Donny Osmond won season nine when he was 51). He’s also nearly two feet taller than his pro partner Lindsay Arnold, which may be difficult to compensate for on the dance floor. And basketball players don’t have a strong track record on “DWTS”; so far the best contestant was Rick Fox‘s 6th place finish in season 11.

That basketball curse may be one reason why Ogunbowale ranks second in our predictions with 9/2 odds. And while she helped win the NCAA championship for the Notre Dame women’s basketball team, the NCAA is paying her back by not allowing her to promote herself while on “DWTS.” That will make it hard for her to generate fan support, especially because tonight’s elimination will be determined by the judges’ scores and viewer votes that will be cast during the show. So it’s possible for the audience to vote for a contestant they haven’t even seen yet, making the voting even more a popularity contest than usual.

Do you agree with our predictions that Abdul-Jabbar and Ogunbowale are at the greatest risk? Check out the graphs below to see the rest of the vulnerable contestants according to our predictions. Click on them to see more detailed prediction stats for tonight’s show. 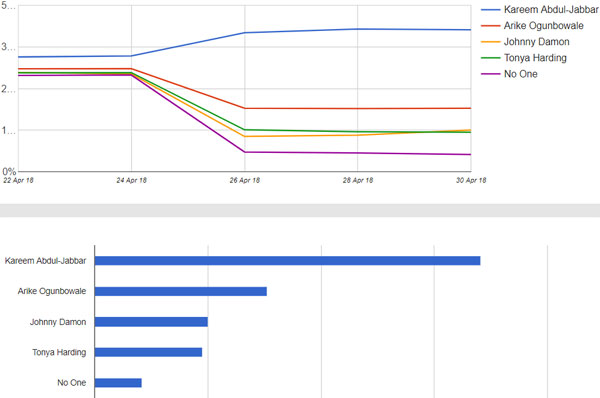