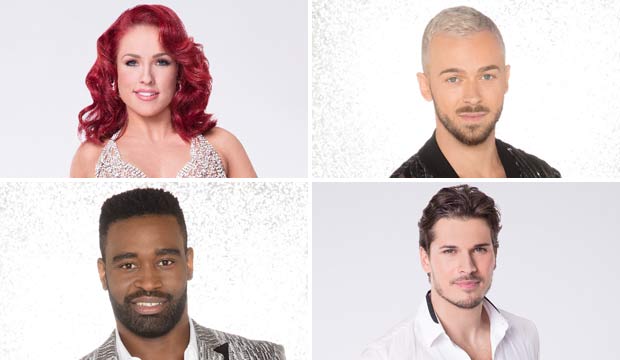 On April 12 “Dancing with the Stars” revealed the 10 professional dancers who will partner with celebrity athletes for the special shortened 26th season of the dance competition, which begins April 30. Of those, only three have ever won the Mirror Ball Trophy before: Lindsay Arnold, Emma Slater and Witney Carson. That means most of this season’s pros will be fighting for their first championship. Which of the seven winless dancers is most overdue for the trophy? Scroll down to vote in our poll at the bottom of this post.

The most veteran among the dancers who have yet to win is Sharna Burges, who will be competing for her 11th straight season. She has made the finals three times, including two runner-up finishes with singer Nick Carter (season 21) and auto racer James Hinchcliffe (season 23), so she has been right on the cusp but has fallen just short of the finish line.

Artem Chigvintsev will be competing on the show for the lucky seventh time, but his best results were sixth-place finishes in season 19 with Lea Thompson and season 24 with Nancy Kerrigan. But Chigvintsev did win Britain’s “DWTS” equivalent “Strictly Come Dancing” back in 2010.

Keo Motsepe is also entering the ballroom for the seventh time as a pro dancer. Like Chigvintsev his best finish was sixth, with Jodie Sweetin in season 22, but that was the only time poor Motsepe has finished better than 11th. And in fact he was the first pro eliminated three times out of his previous six outings: with track and field star Lolo Jones in season 19, singer Chaka Khan in season 21 and “Shark Tank” entrepreneur Barbara Corcoran in season 25.

Gleb Savchenko is competing for the fifth time. He previously finished just shy of the top three in season 23, when he and country singer Jana Kramer were eliminated in fourth place. Sasha Farber is also going into his fifth season on the show and also peaked in fourth place, with gymnast Simone Biles in season 24.

After appearing on “DWTS” as a troupe dancer, Alan Bersten made his debut as a pro in season 25 last fall with singer Debbie Gibson, but they were ousted in 12th place. And this season Jenna Johnson is making a comeback after her last-place finish with Disney Channel actor Jake T. Austin in season 23.

So which of those also-rans from seasons past do you think most deserves their first Mirror Ball Trophy? Vote below.