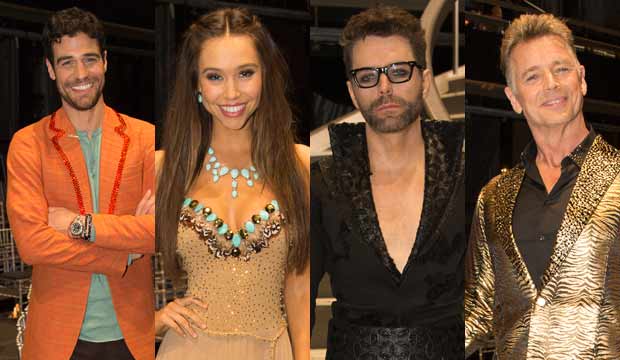 There are eight celebrities remaining on “Dancing with the Stars,” but by the end of the night that number will be cut down to six. It’s Country Night, and two contestants will be drummed out in a double elimination — or maybe banjoed out in the spirit of the show’s theme. Who will it be?

Considering how the season has gone so far, it seems like one of the ousted celebs will probably be a woman. This is been a historically bad season for female stars, who have been the victims of all five eliminations thus far. The only two left are model Alexis Ren and “Harry Potter” actress Evanna Lynch. They both have earned high scores this season, but that didn’t help contestants like Tinashe and Mary Lou Retton.

However, despite being safe every week even with low scores, Joe Amabile is our odds-on favorite to be sent home. Based on the combined predictions of Gold Derby users, he gets leading odds of 39/10 to finally be sent packing. That would be ironic since his judges’ scores last week on Halloween Night, which will be added to last week’s viewer votes to determine tonight’s elimination, were his best ever. It was the first time he wasn’t at the bottom of the judges’ leaderboard, but maybe that made his zealous fans complacent, leading them not to vote as strongly as they did before.

Ranked second in our predictions is Alexis Ren with 9/2 odds. The judges like her, but she scored in the middle of the pack last week, and her sudden showmance with her pro partner Alan Bersten may not be going over too well with viewers. So if our odds are right that means a sixth elimination in a row with a woman sent home.

SEE#TeamJoeDown will lose the ‘Dancing with the Stars’ team dance showdown, readers predict

Tied for third place in our odds are John Schneider and Bobby Bones with 6/1 odds. Schneider got slammed by the judges for his Halloween paso doble, landing him at the bottom of the leaderboard for the first time and putting him at his greatest risk of elimination. But that could also activate his fan base to vote for him more aggressively. Meanwhile, Bones tied with Amabile for the second lowest judges’ score, but like Amabile he has had pretty rock-solid support from viewers as well.

Do you agree with our odds? Our graphs below illustrate our current elimination predictions. Click on them to see more detailed forecasts for tonight’s show. 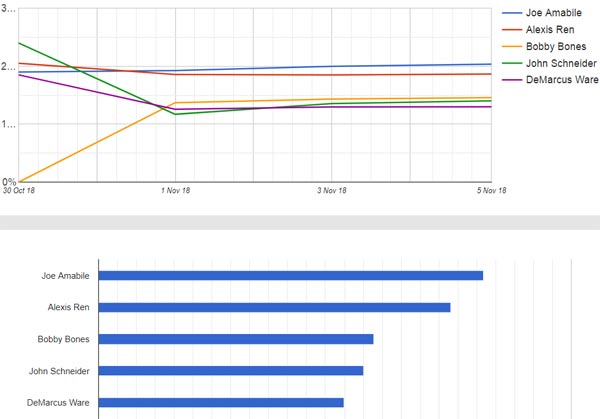