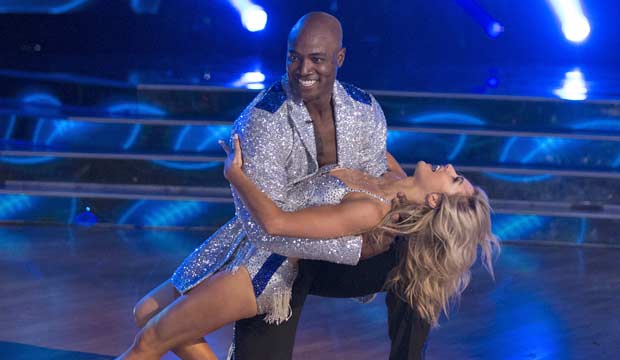 If you thought DeMarcus Ware‘s gnarly finger injury during “Dancing with the Stars” rehearsals occurred while he was practicing a lift or something, think again. It turns out his dislocated finger wasn’t dance-induced at all.

Ware and Lindsay Arnold are joined by Season 24 champ Rashad Jennings for Trio Week, and a seemingly innocuous greeting between the two football players turned painful. “We were celebrating because Rashad first came in [to the rehearsal], and we did like a chest bump. And his foot on the chest bump just hit my hand,” Ware explained to “Entertainment Tonight,” which has footage of the fateful not-meet-cute between Jennings’ foot and Ware’s finger.

Ware knew immediately something was wrong and thought he had broken his finger, which was pointing every which way. Arnold drove them all to urgent care, where Ware got it popped back in. “These two handled it so freaking well. I was looking at the finger about to pass out and vomit,” Arnold said. “I’ve never taken a partner of mine to the ER for an injury, but I’m taking somebody to the ER, I’m thinking, ‘Oh gosh, we’re in big trouble.'”

SEE ‘Dancing with the Stars” DeMarcus Ware dislocated his finger, and these videos are definitely not for the squeamish

On the contrary — Ware insisted on returning to rehearsal like they merely just stepped out for lunch. And Arnold has not had to change any choreography in their football-themed (what else?) paso doble for Ware, whose finger is now buddy-taped. “In football practice, if your hand gets dislocated, I pop it back, wrap it up, let’s go get it,” he said.

So things are looking good despite that inauspicious beginning. “As soon as I said hello to my teammates, I dislocated his finger! So I felt really bad,” Jennings said with a laugh. “So it was a great introduction to the trio,” Ware added.