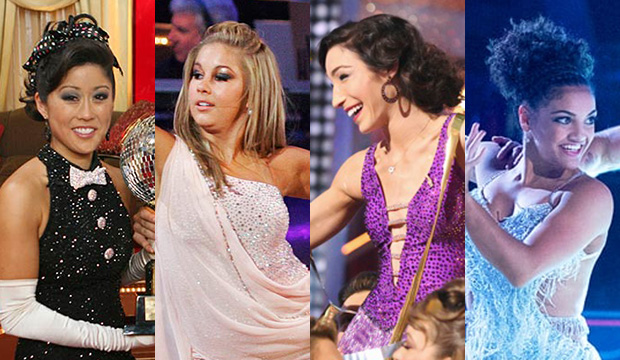 It’s no surprise “Dancing with the Stars” is trying its hand at an all-athletes season, premiering April 30. Athletes are one of the most successful class of contestants in the show’s history, producing 10 winners in 25 seasons. Of those 10, four were women. Which one of them was your favorite?

All four champs also happen to be Olympians — a very fruitful subsect of athletes — and gold medalists at that in the marquee sports of the Summer and Winter Olympics. 1992 Olympic figure skating champion Kristi Yamaguchi was the first, taking home the Mirrorball trophy in Season 6 in 2008 with Mark Ballas. The pair dominated the season, topping the leaderboard 10 out of 12 times, and received four of the perfect 30s given out during the season.

In Season 8 in 2009, Ballas coached his second Olympic champion to the Mirrorball: gymnast Shawn Johnson, who won gold on the balance beam in 2008. The then-17-year-old beat actor and model Gilles Marini and Cheryl Burke, the season-long favorites, by less than 1 percent, the closest margin in the show’s history. Johnson later returned for the all-stars season, partnered with Ballas’ BFF Derek Hough, and finished second to Melissa Rycroft and Tony Dovolani, who had originally placed third in Season 8.

A female athlete wouldn’t win again until Season 18 in 2014, when 2014 Olympic ice dancing champ Meryl Davis and Maksim Chmerkovskiy. Davis and Chmerkovskiy topped the leaderboard nine out of 12 times and beat another female athlete in the final two: Paralympic snowboarder Amy Purdy and Hough.

The fourth and most recent female athlete to bag the Mirrorball was Laurie Hernandez in Season 23 in 2016, who won gold as part of the Final Five gymnastics team in Rio. Hernandez and Val Chmerkovskiy were head and shoulders about the competition, nabbing eight perfect scores of 40 and never scoring lower than 31. At 16, Hernandez dethroned Johnson as the show’s youngest winner, a title she still holds.

Which of these champs is your favorite? Vote below!