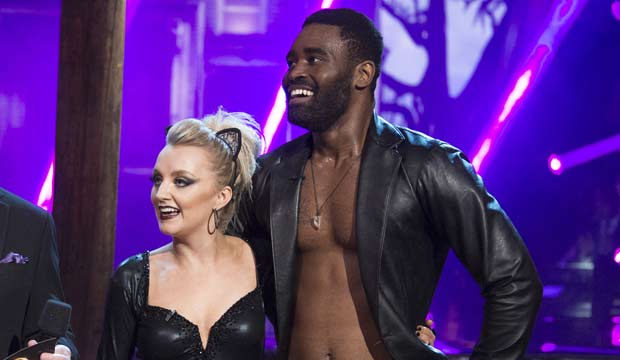 Sharna Burgess and Keo Motsepe are two of the unluckiest pros on “Dancing with the Stars” — for very different reasons — but one of their fortunes could change Monday with a win. And if our readers had their druthers, 66 percent would give the Mirrorball trophy to Motsepe.

Motsepe, who’s favored to win with Evanna Lynch, seemed like he was always doomed for early exits. Not counting the “Athletes” installment, he’s been eliminated first three times and third twice; his best finish was sixth place with Jodie Sweetin on Season 22. Vote-based eliminations can be crapshoots, but outside of Sweetin to a lesser degree, Motsepe had also never been partnered with someone with winning potential before Lynch. And he’s done a great job with her, as she’s markedly improved since the first week.

“[Keo] is a great dancer BUT it seems he always gets the lousy partners. GO KEO it’s your time 2 shine,” user Janet wrote.

SEE Breaking down the ‘Dancing with the Stars’ final 4: Who will win?

The only female pro this season who has yet to win, Burgess has more experience at the business end of the “Dancing” season than Motsepe. The now five-time finalist has come in second place three times and third place once behind four couples who were locks in their seasons: Rumer Willis and Val Chmerkovskiy (Season 20), Bindi Irwin and Derek Hough (Season 21), Laurie Hernandez and Val Chmerkovskiy (Season 23), and Adam Rippon and Jenna Johnson (Season 26).

Burgess has done some nice work with Bobby Bones this season, but he still pales in comparison technically to the other three finalists, Lynch, Milo Manheim and Alexis Ren, and is the only left who’s yet to receive a 9, let alone a perfect score. Still, he carries a large fan base that compensate for the lower scores.

“Sharna is long, long, long overdue for a win,” user Caity said. “But I’d rather see her win with someone who’s a better dancer.”