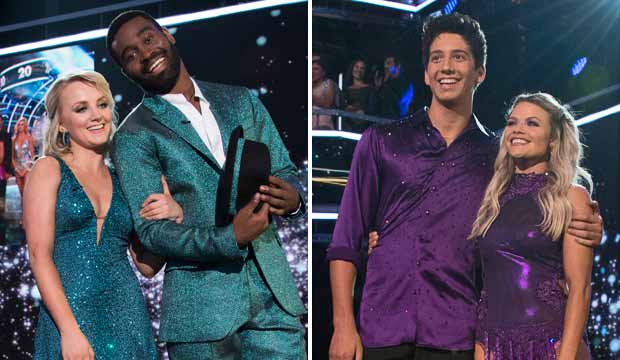 Gold Derby users were ahead of the curve when predicting the “Dancing with the Stars” season 27 Mirror Ball Trophy. Evanna Lynch has been the front-runner to win since week six, when the female celebs were still dropping like flies and it looked like there might be an all-male finals. But Lynch outlasted previous Mirror Ball favorites like DeMarcus Ware and Juan Pablo Di Pace, and now the “Harry Potter” actress is still positioned to win. But does she deserve to win? Well, that’s another story.

According to the combined predictions of hundreds of Gold Derby users, Lynch gets leading odds of 5/4 to prevail, but that lead is far from safe. That only translates to about a 44% chance of victory, and teenage Disney Channel star Milo Manheim is breathing down her neck with odds of 13/8, or a 38% chance of winning. It’s neck-and-neck between those two while radio personality Bobby Bones ranks third with 19/2 odds (10% chance of winning) and Alexis Ren rounds out the finalists with 12/1 odds (8% chance of winning).

When we asked our readers who should win the Mirror Ball Trophy, it was a close race between the same two celebs, but the result was reversed. Manheim actually led our poll with 38% of the vote, followed by Lynch with 34%. Ren trailed with 15%, while Bones had support from 13% of respondents. And perhaps these are the results we should really be paying attention to. After all, fans will be voting at home during the show for who they want to win the Mirror Ball, so if Manheim was out front with our readers, maybe he will be for the public at large too.

Check out the chart below to see the breakdown of our Mirror Ball predictions (click on it for more detailed forecasts for tonight’s show). And scroll down for our complete poll results. Is this one of the closest contests in “DWTS” history? 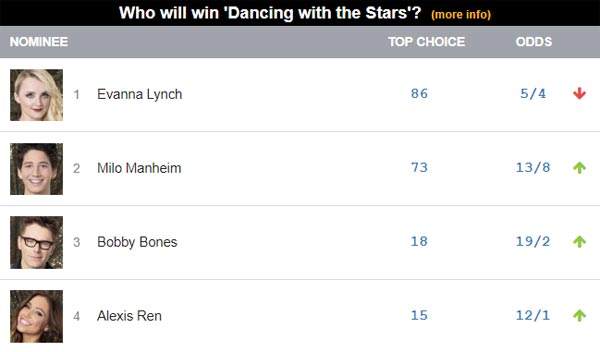 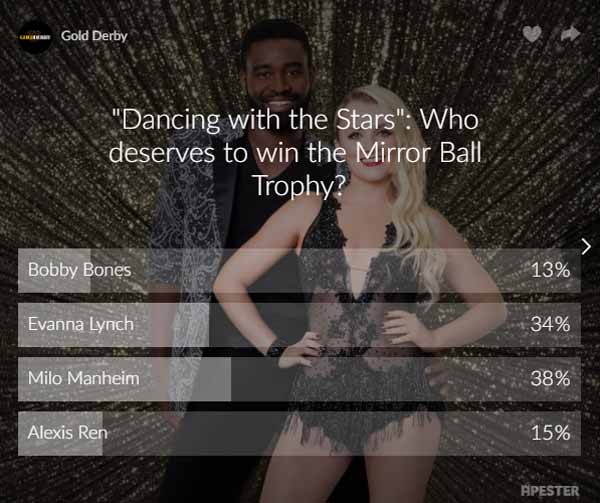