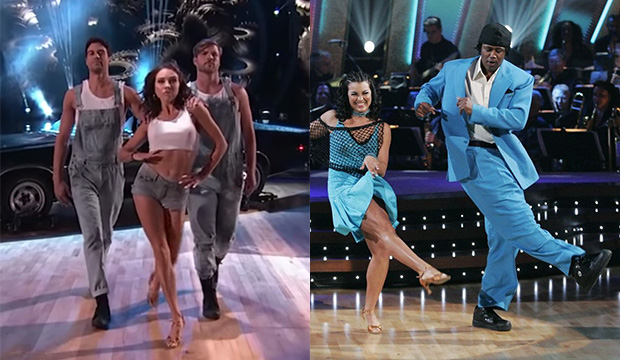 Have you recovered from Joe “Grocery Store Joe” Amabile‘s abomination of a salsa on Monday’s “Dancing with the Stars”? No? We haven’t either. Joe has moved past “comically bad” on the show to “tragically bad” — ‘Tragic Mike’ is very apt to describe that dance — and it’s just painful to watch now. He scored a 15, inordinately low for Week 4 standards, but still not the lowest score of all time. That “honor” goes to Master P, who pulled an 8 in Week 4 in Season 2 for his paso doble. But which of their performances was the worst?

Joe’s salsa was doomed the second Jenna Johnson wanted it to be “sexy.” Joe is a lot of things, and it’s not that he’s not sexy, but he lacks the personality and confidence to act sexy while forcing himself to move his feet and body in ways he’s never moved them before. It was as awkward an uncomfortable for us as it was for him probably. Then we had their trio partner Jordan Kimball‘s wardrobe malfunction, when he failed to rip out his shirt, which is just kind of pathetically perfect. Johnson had to add in Val Chmerkovskiy and Gleb Savchenko to distract us from the hot mess unfolding before our eyes, but nothing could save us. Fortunately for them, and unfortunately for Tinashe, Bachelor Nation saved them, but honestly, guys, it’s time to put him out of his misery. Does it even look like he’s enjoying himself out there?

SEE What the hell just happened? Grocery Store Joe turned a ‘Dancing with the Stars’ striptease into ‘Tragic Mike’ [WATCH]

One thing Joe is doing is putting in effort — he’s just not a dancer — which was not true at all for Master P. The rapper basically walked through his dances, and nabbed scores of 12, 16 and 14. (At least Joe can say he has a higher score average than someone). The nadir came in Week 4, when he quarter-assed a paso doble with Ashly DelGrosso, prompting Bruno Tonioli to cut his flowery remarks and go straight to the point. “It was a nightmare,” he said. “I can’t judge something that has nothing to judge.” Len Goodman was more blunt: “I know the viewers think they’re being kind in bringing you back. They’re not; they’re being cruel to you, to Ashly, to the judges. Honestly, it’s time to go.” He could’ve said the same thing Monday night to Joe. (Also, don’t you miss the early days when the show was less produced and the judges said what was on their minds?) They busted out the 4, 2 and 2 paddles, and unlike Joe, Week 4 was the end of the road for Master P. The judges may have to start giving Joe Master P-level scores to counteract Bachelor Nation now that scores are combined with the previous week’s votes with the return to one show a week.