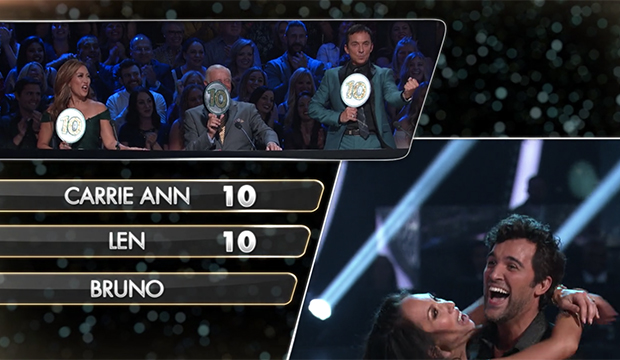 In the biggest twist so far this season on “Dancing with the Stars,” we got a perfect score on Monday’s show. Juan Pablo Di Pace and Cheryl Burke nabbed a 30 for their samba, but let’s be real, Week 3 too early to be tossing out 10 paddles like this.

This is not to say the “Fuller House” star didn’t deserve that 30, though I wouldn’t have given him one. The routine was sexy and dynamic, he nailed those samba rolls, and it had great choreography. The judges salivated over it and out came the three 10s. This is such an atypical move since they normally don’t give perfect scores — not even to the ringiest of ringers — until the midway point of the show. Not counting the “Athletes” season, this was when the perfect scores (a 30 or 40) were first handed out the last five regular seasons:

SEE Whoa! Did Juan Pablo Di Pace really deserve that perfect score for his samba on ‘Dancing with the Stars’? [WATCH]

The midpoint of the season is a very reasonable time to give them out — you certainly don’t want to award them too early and make it seem like the celeb has already peaked. You know what they say: It’s all downhill from here. Halfway fits with an improvement arc leading into the business end of the season. Plus, in the past, even when the judges lost their minds over a dance early in the season, there was always one or two of them (usually Len Goodman) holding back and giving out a 9 while the others doled out 10s.

Even Di Pace and Burke were stunned at the triple 10s paddles staring back at them. It’s like they knew they were good, but not that good this soon. So why did they get that perfect 30? My go-to conspiracy theory: Di Pace’s struggling in votes and the show wants him to stick around, so he needs the scores to compensate. We’ve seen the judges give cushions to people in the past, though it’s not usually a perfect score. But he’s also good enough that a 30 doesn’t feel off. Or maybe the judges just really, really, really liked that dance.

Either way, this could potentially hurt them in the future if Di Pace can’t reach these heights again or if fans feel like the show or judges are playing favorites with him with these “undeserving” scores.