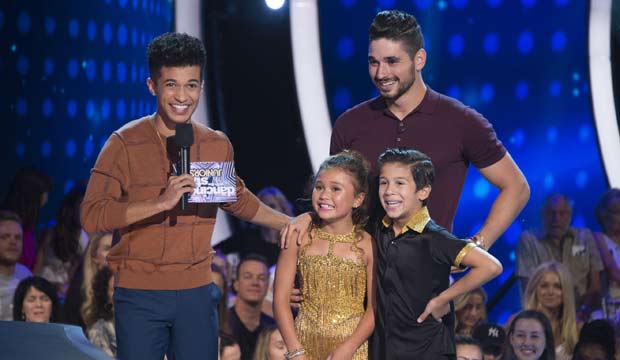 “Dancing with the Stars: Juniors” took a week off while Disney-owned ABC celebrated Mickey Mouse’s 90th birthday on November 4, but the kids were back on November 11 for their fifth week of competition. And this time the kids took the reins. For Juniors Choice Night the contestants picked their own music, some of which had special emotional significance to the competitors. So who gave the best performances, and who was eliminated at the end of the night? Find out below in our live blog with all the minute-by-minute developments as they happen.

There were seven contestants left competing for the Mirror Ball Trophy going into week five, and according to the combined predictions of Gold Derby users, skateboarding prodigy Sky Brown was the front-runner to win with 14/5 odds. But in the first four weeks of the competition she hadn’t topped the judges’ leaderboard at all, even though she was close to the top each time. Was she finally able to reach the summit and cement her position as the Mirror Ball favorite?

In the first four weeks the highest scoring contestant overall was actually Miles Brown. The “Black-ish” actor had led the leaderboard more often than not. His performances have been so consistently good and polished, in fact, that I think he would be a contender to win the Mirror Ball Trophy even if the 13-year-old were competing in the adult version of “Dancing with the Stars.”

But even halfway through the “Juniors” season the race is still wide open with “Dance Moms” alum Mackenzie Ziegler and “Avengers” actress Ariana Greenblatt also establishing themselves as strong challengers to win — provided they survived Juniors Choice, that is. Find out what happened below starting at 8:00pm (all times listed are Eastern).

8:01pm— Miles wants to honor his favorite movie, “Space Jam,” but Miles is back on-set at “Black-ish,” so they’re using Facetime to help Miles train. He’s not able to train it with them until the day before the actual show. If he can pull this off, it’s hard to imagine him losing the season.

8:04pm — Perfect, polished blend of jazz and hip-hop. This kid is as good as the pros.

JUDGES — Mandy Moore thinks the kids need to be “in charge a little more often … It was big, it had energy, the audience was going. Adam Rippon says, “Tonight was a slam dunk.” And Val Chmerkovskiy “loved it. It was incredible.

8:05pm — I’m pretty surprised that routine didn’t score any 10s. Miles has been stuck at 9 for the last three weeks. The judges haven’t given any 10s at all yet.

Cha Cha – “What If” by Johnny Orlando and Mackenzie Ziegler

8:07pm — Mackenzie is dancing to her own song, which might be an advantage she she obviously knows it so well. She tears up during her clip package talking about how singing helped her break out of her shell and gave her the courage to put herself out there.

8:08pm — A pretty rock-solid cha cha from Mackenzie. High energy, lots of impressive cha cha content and executed expertly. It’s tough for the rest of the celebs that the night started with two of the most technically gifted performers of the whole season.

JUDGES — Adam says, “You’re killing it. You should be so proud of yourself.” And he dug the song too. Val adds, “This was really complex choreography and I think you need to be validated for that.” Mandy thinks she’s a “great performer” full of “star quality … Continue to work on that partnering, continue to work on that push and pull together.”

8:13pm — Mackenzie also stuck at 9s. I wonder what it’s going to take for the judges to pull out those 10 paddles.

8:14pm — This song means a lot to Jason because it helped him get his job on “Raven’s Home” on the Disney Channel. Emma wants the routine to be full of swag, and Jason recommends gold chains everywhere. It’s funny how a couple of these Juniors Choice songs are so much older than the dancers themselves. “I just really love old music.”

8:16pm — A really busy routine with a lot of troupe dancers. Jason isn’t the most proficient contestant on the show, and I think he got a little lost in the shuffle there, but Jason is a total charmer, so I wasn’t mad at it.

JUDGES — Val thought Jason’s “swag was at a hundred thousand trillion … I loved it.” Mandy adds that it had all the elements of a jazz routine, and he danced like he was “six-foot-five.” And Adam thought Jason was the “leader” of his dance crew and “rocked the house.”

8:19pm — As much as I love Jason, those scores were a little generous. I’m not sure where that 9 came from.

Charleston – “Do Your Thing” by Basement Jaxx

8:25pm — I’m a little worried about Akash doing Charleston. It’s a high-energy style with a lot of intricate choreography, and he hasn’t quite shown he’s got the technical skills for it. And he has scored all 7s for every routine thus far. He’s going to be spelling in the dance, not sure exactly how that’s going to work.

8:26pm — A little messy, a little hectic, but he nailed parts of that choreography better than I expected him to, and he actually stopped to spell the longest word in the English language.

8:29pm — I think Akash might have been taking a page from Sky Brown’s playbook when he took the microphone to make an inspirational statement after the judges’ critiques. The judges were generally supporting and kind about Akash in general without saying very much specifically about his dance, so I’m not surprised the scores were lower. I think the 7s were right, but I’m surprised Adam whipped out that 6. That was a little harsh since this is now Akash’s lowest-scoring dance of the season, and the judges were way more generous to Jason for a routine that I didn’t think was significantly better than this one.

Samba – “The Greatest” by Sia

8:34pm — That routine started a little slow and tentative, but then took off when the chorus kicked in, and she was pretty flawless from that point on.

JUDGES — Adam thought she was “kicking biscuits and taking names,” even though she needed to point her toes better. Val “applauded” her commitment to ballroom dance since it was full of proper samba content. Mandy thought it had “amazing content” and Sky did an “excellent job” with her execution. Then Sky gives a shout out to Maddie Ziegler in the audience, who danced in the music video for “The Greatest” and she has in multiple Sia videos.

8:37pm — Damn, Adam! He low-balled another couple. Is he hangry or something? Someone get him a snack or refresh his coffee.

8:42pm — Burn! Stevie Wonder‘s son is choosing to perform … to Bruno Mars. I hope it turns out well. Mandla started the season with a lot of promise but has been backsliding since then.

8:44pm — A return to form for Mandla! Could have used more cha cha content, but he showed a lot more swagger, musicality and charisma than he has in a while. It might have been his connection to the music that did it this week.

JUDGES — Val thought he’s shaping up to be an “incredible artist.” Mandy praises him for his “poise and swag … And I loved the contact between you two.” And Adam thought he found his “groove” again.

8:46pm — Whew, I was worried Adam would give them a 7 the way the night has been going. Great scores for Mandla’s best performance in a while, maybe his best performance of the season thus far. He should pick his own music more often.

8:51pm — The judges made Ariana cry last week with their scores, which I think were a lot lower than she deserved. Adam, you’re on notice. Assuming this routine is at her usual level, make it rain with those scores!

8:54pm — Wow, that was a pretty dazzling routine — more hip-hop than jazz, really, but full of the kinds of athletics and acrobatics that would make adult contestants jealous. Outstanding execution on all of those tough moves.

JUDGES — Mandy thought it was “awesome” and she noticed more jazz content than I did. I’ll take her word for it since she’s the jazz expert. Adam says, “There’s nothing more that we could have asked from you,” and coming back from a harsh critique shows she’s a “champion.” And Val thought she had “charisma, swagger and presence” in every genre of dance she has performed so far.

8:57pm — It’s about time someone brought out their 10 paddle this season, and from Adam, who has been pretty shady with his scores all night, so he has redeemed himself a little with me.

And the contestant going home is … Jason Maybaum

8:59pm — I’m not gonna lie, this elimination surprises me. He got pretty high scores, and he has had a really outgoing personality, so I thought he would get a lot of fan support. Akash had much lower scores, so his shout out to the youth of America clearly paid off. Next week everyone is going to need to give an inspirational speech to the studio audience if they want that Mirror Ball Trophy.

Who will be eliminated? Jason Maybaum

Who will get the judges’ HIGHEST score? Ariana Greenblatt (28)

Who will get the judges’ LOWEST score? Akash Vukoti (20)

Which judge will give out the MOST points? Val Chmerkovskiy and Mandy Moore (59)

Which judge will give out the FEWEST points? Adam Rippon (57)