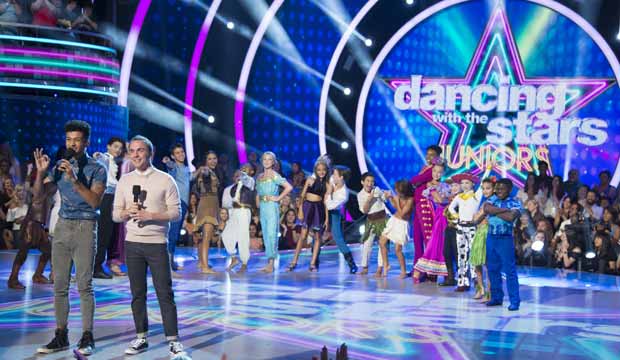 Disney Night has become a tradition on “Dancing with the Stars,” but this season it has expanded to a two-night affair. The top nine child celebrities performed Disney-inspired routines on “DWTS: Juniors” on Sunday night, and the grownups will do the same in Monday’s episode of the original series. Disney is known for its family films, which makes it a perfect fit for “Juniors.” So how did the kids do? Find out below in our live blog with all the minute-by-minute developments as they happen.

The first two weeks of the competition quickly cut the roster from 12 contestants to 9. Tripp Johnston and Addison Osta Smith had the lowest judges’ scores in week one and were both eliminated after the studio audience votes were factored in. But week two ended in a surprise: “General Hospital” actor Hudson West got the boot even though he had one of the night’s higher scores.

That meant Alana Thompson, better known as Honey Boo Boo, was spared even though she had the lowest score last week. Did she remain a crowd favorite on Disney Night and maybe even improve her scores? Our users who predicted tonight’s show thought she might be vulnerable, placing her third in our elimination forecasts behind Jason Maybaum and Sophia Pippen, who also had low scores in week two.

But while those celebs struggled in previous weeks, “Black-ish” star Miles Brown excelled, tying for the top judges’ score in week two and also rising to the top of our predictions for who will win the Mirror Ball Trophy. Was he able to maintain his momentum against high-scoring rivals Ariana Greenblatt and Mackenzie Ziegler? Find out below starting at 8:00pm (all times listed are Eastern).

8:02pm — Sophia gets a sudden visit from her godmother Kim Kardashian, who advises Sophia to “be confident” and “let it go.” Last week Adam Rippon wanted Sophia to open up more, and Kim thinks her own shyness did her in when she competed on “DWTS.”

JUDGES — Mandy Moore loved the “bossy chick” persona, but thought Sophia could make better use of her legs. Adam thinks Sophia did what he was hoping hope and upped her performance level. Val Chmerkovskiy wanted some more drama and for her to finish her arm movements.

8:06pm — Those scores were a step down from last week, but I think they were warranted. I think Sophia is still to reserved and needs to open up more.

Contemporary – “Colors of the Wind” from “Pocahontas”

8:07pm — Mackenzie is definitely in her comfort zone performing a contemporary routine. Not only does this style usually score higher on “DWTS,” it’s actually a style she has experience in.

JUDGES — Adam has “chills” after her performance. Val thought it was “breathtaking … I’m proud to see kids do extraordinary things.” Mandy, the contemporary expert on the panel, thought she was fluid and light, just like the contemporary needs.

8:10pm — The highest score of the season so far. I think those marks are well deserved for the quality of the routine, though I also think maybe there should be some kind of handicap since she has training in this style.

8:13pm — Second samba of the night. Ariana has been the highest scoring dancer for the last two weeks, but it’ll be hard to match Mackenzie’s scores with a more challenging dance style.

8:17pm — Not quite as good as Mackenzie’s score, but it’s still Ariana’s best score of the season so far, so she’s definitely on the rise. I thought she did a solid job. I didn’t think it was quite at the level of her previous dances, but it was definitely a stronger samba than Sophia’s.

8:18pm — Cheryl hopes Mandla can channel the “machismo” he needs to execute the character if the music.

JUDGES –Mandy thought he was “in the pocket” and used his legs much better than last week. Adam sees that he’s still working on his technique, but he was a fan because of the quality of his performance. Val was underwhelmed: “You are a star, but you can do better.”

8:21pm — I’m with Val on this one. I thought he executed the steps well, but it didn’t quite have the intensity and charisma that song needed.

Charleston – “One Jump Ahead” from “Aladdin”

8:25pm — I have high hopes for this performance. It’s an energetic dance style, Miles has charisma for days, and a few of tonight’s routines so far have been a little too reserved.

JUDGES — Adam says, “You looked the competition in the eyes and said, ‘Hey, don’t forget about me!’ Val appreciated the “quentessential” Charleston and his command of the dance. Mandy thought with all the production Miles could have gotten lost in it, but he was truly the star of it.

8:29pm — That was by far the best performance of the night so far, and tied for the top judges score. Miles could outdo most of the adult stars on the main show. Perfect technique and timing and great character work.

Foxtrot – “Something There” from “Beauty and the Beast”

8:30pm — Artem teaches Alana Thompson some etiquette to bring out the lady in her for her foxtrot, her most elegant dance style so far.

JUDGES — Val says, “I don’t think there’s anyone out there watching that who’s not smiling.” Mandy thought she was “cool, calm and collected” and she “really loved it.” Adam praises her for her performance quality and for telling a story on the stage.

8:33pm — I think this was by far Honey Boo Boo’s best performance, not least of all because this time I thought she actually gave one. In previous weeks it seemed like Tristan was mostly dancing around her, but tonight she actually executed a foxtrot. A little rough around the edges, but still a pretty good foxtrot.

8:36pm — Honey Boo Boo would have probably gotten enough support from the studio audience anyway, but these scores are a major step up, and I think will definitely keep her in the competition for at least another week.

8:38pm — “Moana had a big heart, kind of like me,” says Sky about performing to Disney’s recent hit. Sky exhibited peak adorableness in the clip package.

JUDGES — Mandy loved it, but gives Sky gives her advice about her feet: she need to point her toes so her feet don’t look like “biscuits.” Adam was impressed by the “range of emotion … That performance was so mature.” Val “loves biscuits and loved that contemporary.”

8:41pm — Sky is one of the most expressive celebs in this competition. That was a bright, outgoing, rhythmic performance, and then she even gave a pep talk to all the girls watching in the audience: “Be brave … Don’t let anyone stop you.” Oh my God, Sky, you’re killing me with the cute. But I thought she deserved at least one 9 from the judging panel; I might have preferred that contemporary to Mackenzie’s.

8:43pm — “Moana” is pretty popular on “DWTS.” I think this was the third time there have been a Disney Night performance inspired by the film, and it’s the second time someone has specifically performed a contemporary routine to “How Far I’ll Go” — Simone Biles did too in season 24.

Foxtrot – “You’ve Got a Friend in Me” from “Toy Story”

8:46pm — “It’s like the dream can never stop!” says an ecstatic Jason about dancing on Disney Night, and he’s giving Sky a run for her money in the cuteness department. “‘Toy Story’ is my Disney movie,” he says, so he’s certainly enthusiastic. I really like this kid, so hopefully his technique is a little more polished, because that’s all he really needs.

JUDGES — Adam thinks Jason is a “great performer” and this week he showed he’s a “great partner” to Elliana. Val thought it was “adorable,” but also had great footwork and technique. Mandy appreciated his “quick-quick-slow” moments when he was in frame.

8:49pm — Another dancer to get a nice boost in his scores, and well deserved. He’s so charming on stage, and this week he had his strongest technique. He had great musicality, and had excellent posture in hold.

Jive – “Zero to Hero” from “Hercules”

8:50pm — “You have to be the strong rock,” Witney tells tiny Akash, who is playing Hercules in this scenario — no pressure.

JUDGES — Val thought it was “great” and had a lot of personality, but jive is all about the kicks so Akash needs to remember not to “skip leg day.” Mandy was impressed that he was on beat for his kicks. Adam appreciates that he dances with his heart on his sleeve and “this workout plan is working for you.”

8:52pm — I thought it was a sweet, charming, and charismatic routine … but the technique was all over the place. I don’t want to see him go, but he needs to clean up the footwork to keep up with his competitors.

8:58pm — The audience votes are in, and the couple going home tonight is … Sophia Pippen and Jake Monreal.

8:59pm — The eliminations are especially tough on this show. No one wants to see children cry. But after tonight’s performance this result wasn’t too surprising. Sophia performed first, and she never quite came out of her shell, even when playing villainous Ursula, so it’s understandable that she got lost in the shuffle. Great effort, though!

Who will be eliminated? Sophia Pippen

Who will get the HIGHEST score? Miles Brown and Mackenzie Ziegler (27 out of 30)

Which judge will give the MOST points? Val Chmerkovskiy (71)

Which judge will give the FEWEST points? Mandy Moore and Adam Rippon (68)