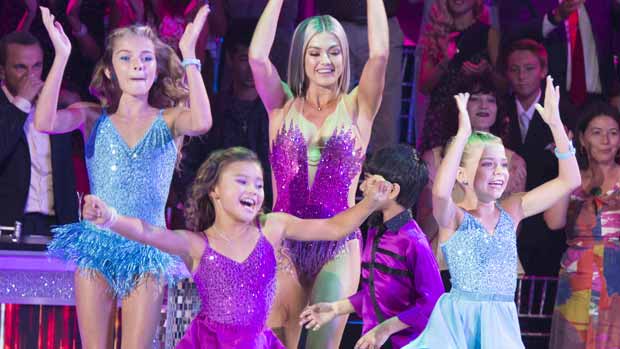 The adults are almost done on “Dancing with the Stars,” but the inaugural season of “Juniors” is still underway with six kids remaining following last week’s ouster of Disney Channel star Jason Maybaum. So who was the next to go? On Giving Thanks Night the young celebs dedicated their routines to people who inspired them. Follow along with our live blog below to find out who had reason to be grateful and who said “Thanks for nothing” to the judges and studio audience.

Last week’s Juniors Choice Night put “Avengers” actress Ariana Greenblatt at the top of the judges’ leaderboard with the season’s first 10, and “Black-ish” star Miles Brown was close behind with another set of straight 9s. Skateboarding prodigy Sky Brown trailed in the scores, but the Gold Derby users who enter their predictions every week still think she’s the one to beat for the Mirror Ball Trophy. Was she able to get back in the judges’ good graces?

And was spelling bee phenom Akash Vukoti finally able to pick up the pace? The show’s youngest contestant has received almost entirely 7s from the judges’ since the season started, and on Juniors Choice Night he actually dipped a bit with a 6 from Adam Rippon. But the studio audience clearly loves Vukoti, as evidenced by last week’s elimination of the higher-scoring Maybaum, so he may be able to coast on fan affection like similarly low-scoring fan-favorite Bobby Bones in the adult contest. But for how long?

What did you think of Giving Thanks Night? Did it change the race for the Mirror Ball Trophy as the season narrows down to its most elite competitors? Find out below starting at 8:00pm (all times listed are Eastern).

DISCUSS‘Dancing with the Stars’ in our notorious forums

8:02pm — Ariana is dedicating tonight’s routine to her parents. She picked this song because “my family always plays this song on the spinning thing.” Record player, she means record player. “I hope I can make you proud with this amazing salsa I’m going to do,” she says to mom and dad.

8:04pm — A little rough around the edges in places, some of the movements were a little wild. But she was taking on some intense, relentless choreography and held her own. Kudos!

JUDGES — Mandy Moore is “grateful for that salsa … I love that it was very complex.” Adam Rippon asks Artyon if he can lift him next. Val thought “that salsa was spicy … That was athletic, but it was really authentic as well … I think Puerto Rico is really proud of you.” This Puerto Rican concurs!

8:07pm — She didn’t get another 10 like she did last week, but I thought these scores were just right.

8:12pm — “Tonight I’m giving thanks to my dad,” says Mandla about this performance. He chose his dad’s song for the routine, which makes up not choosing his dad’s music for Juniors Choice. And Stevie’s performing it live, no less.

8:14pm — I think Mandla had some shaky weeks after a strong start this season, but I feel like with last week’s dance and this one’s he has gotten his groove back. He seems to have developed a lot of confidence which has really brought his technique up several notices.

JUDGES — Adam thought Mandla was “so good” and “this was one of your best dances.” Val says, “It looked great to me … You owned that performance.” He also praises Mandla’s partnering with Brightyn, which made the young pro tear up. Mandy thought they were “a beautiful couple” with lots of “control.”

8:17pm — His best score of the season! I was worried about him for a while there. I thought he might be eliminated early, but now I think he might hold on for a while. That’s not a guarantee, though. He needs to get the studio audience on his side, and performing early of the night he needs to hope he doesn’t get lost in the shuffle with some fan favorites yet to come.

Jazz – “Jai Ho! (You are My Destiny)” by A.R. Rahman and The Pussycat Dolls

8:21pm — Like the previous contestants, Akash is dedicating this dance to his family, so he’s doing a jazz routine to “Jai Ho” from “Slumdog Millionaire.” I’m excited to see a Bollywood style routine on the show. His parents already give him 10s for the number, but let’s see if the judges finally give him anything more than 7s.

8:23pm — I like that the choreography was nice and simple, which kept it from overwhelming Akash, who isn’t the most technically skilled of the contestants. But it had enough content to give him opportunities to shine. I dug it.

JUDGES — Vall thought it was Akash’s “best dance of the season … That takes a lot of discipline, a lot of hard work.” Mandy says it had a lot of “brain work and muscles … I thought that was really good.” And Adam says, “You should be very proud of yourself. You were so much sharper … Probably your best dance of the competition.”

8:25pm — Akash finally gets 8s! … But Adam is still holding out on him with that 7. I think that’s fair, though, based on that routine.

8:27pm — After Akash got his scores he gave a shout-out not just to his parents but to all supportive parents. He gave a speech in support of young kids last week and got enough studio audience support to stay in the game despite lower scores. I’m not saying it’s calculated to get the audience on his side, per se, but next week don’t be surprised if he gives an oratory on world peace.

8:30pm — Miles is dedicating this dance to … wait for it … his family! “Mom and dad, this one’s for you.” I mean, it’s entirely appropriate for this precocious kids to celebrate the parents who helped them get where they are, but they could have just called this Parents Are Awesome Night.

8:33pm — I think the height difference between Miles and Rylee got in the way a bit when they were in hold, but I still think Miles is, by far, the best celeb dancer in this competition. And he’s got game, giving a bouquet of flowers to Mandy at the judges’ table.

JUDGES — Mandy says, “I’m in love,” and she was reminded of the work she did with Ryan Gosling in “La La Land,” and there was “a genuine sense of joy.” Adam is shocked he didn’t get flowers too, but “You’re killing it,” even though it wasn’t Adam’s favorite performance from Miles — oh, he’s just mad he didn’t get flowers. But Val actually thought that was “one of your best dances you’ve done all season.”

8:36pm — I never would have thought Adam would be the toughest judge on “Juniors.” I figured he would be the good-cop judge who is always the most kind and supportive while Val or Mandy would be the difficult-to-please Len Goodman of the bunch. And yet last week Adam was the first judge to give a 10.

8:41pm — “They’ve been so patient with me and believing in me,” says Sky about her parents, who flew in from Japan to see her dance. Sky’s younger brother Ocean came too. I’m noticing a theme with those family names.

JUDGES — Adam was “a little emotional … This dance is exactly what the show is about. Than you for sharing your heart with us.” Val adds, “The world has fallen in love with dance because of performances like that,” and he praises her “emotional range … exceptional.” Mandy concludes, “Technically I thought that was incredible,” and Mandy gives a special shout-out to Alan for his spot-on coaching of the young dancers.

8:46pm — Highest score of the season, and well deserved.

8:47pm — “Even if you’re naughty, I’ll still love you,” Sky tells Ocean about the meaning of the song. But no need to worry, Ocean responds by saying, “Sky is the best sister in the whole entire world.” This has become less a dance competition than an irresistible sweetness competition, and I’m not mad at that.

8:51pm — Mackenzie is giving thanks to her big sister Maddie. She’s dancing to a song for which Maddie danced in the music video. Sia is awesome, and I think this song is a good fit for a samba.

JUDGES — Val says, “You killed that,” and he can relate to having an older sibling in the dance business. Mandy loved that the dance was “full-out” and didn’t hold back. Adam says, “Great job,” and wants to know how to become the third Ziegler sister.

8:57pm — To be honest, I think that dance was worthy of 10s, but with Mackenzie’s extensive experience I don’t mind that she was scored a bit lower. Let’s call it the Ringer Tax.

The eliminated contestant is … Akash Vukoti

8:59pm — “I’ll go home tonight with lifelong memories to cherish,” says Akash. Awww, I think at this stage of the competition it was really his time to be eliminated, but I’m going to miss that adorable little guy.

9:02pm — Wow, even with such an excellent score Miles Brown finished second-to-last on the leaderboard. With Akash eliminated the playing field is so level at the point that every single point counts. There’s not much separating first place from last at this point.

Who will be eliminated? Akash Vukoti

Which judge will give the MOST points? Mandy Moore (54 out of 60)

Which judge will give the FEWEST points? Adam Tippon (52 out of 60)