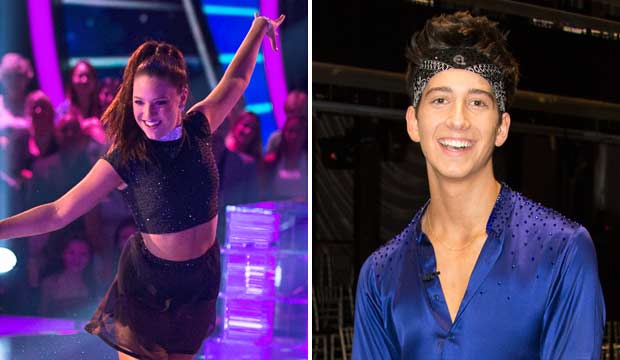 This fall “Dancing with the Stars” launched its “Juniors” spin-off to give kids a chance at the Mirror Ball Trophy, but the way both shows are shaping up this season both prizes could end up going to teenagers. In fact, the junior and senior “DWTS” champions could be separated by only three years.

As of this writing skateboarder Sky Brown is the current front-runner to win “Juniors” with leading odds of 14/5, and she’s a preteen at age 10. But she has a couple of older contestants breathing down her neck. Chief among them is 13-year-old “Black-ish” actor Miles Brown, who ranks second in our predictions with 4/1 odds. After four weeks of competition Miles has already topped the judges’ leaderboard three times, so if he maintains that momentum he may be tough to beat.

Mackenzie Ziegler is not far behind them with 5/1 odds. She’s 14-years-old and has previous dance experience on the reality series “Dance Moms.” In addition, she has finished first on the judges’ leaderboard twice thus far, so we mustn’t underestimate her either.

Meanwhile, the adult “DWTS” features major contenders in their 20s (Evanna Lynch, Alexis Ren) and 30s (Juan Pablo Di Pace), but the Mirror Ball Trophy might end up going to 17-year-old Milo Manheim. After seven weeks of competition he’s tied with Di Pace as the highest scoring contestant of the season, he has been on top of the judges’ leaderboard a whopping four times, and our users think he’s one of the front-runners for the title.

SEE‘Dancing with the Stars’ shocker: The finale will now just be one night

Manheim wouldn’t be the youngest Mirror Ball champ in “DWTS” history — that would be Laurie Hernandez, who won season 23 at age 16. But he would be the youngest man to win by far. The previous record was set just a year ago when 23-year-old Jordan Fisher (who coincidentally now co-hosts “DWTS: Juniors”) won the adult title.

So when all is said and done we could end up with a 14-year-old “Juniors” winner and a 17-year-old adult. Then they can compare Mirror Ball Trophies at the prom.