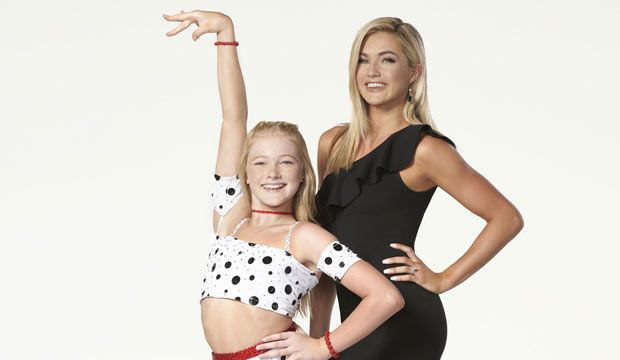 “Dancing with the Stars” pro Lindsay Arnold is the only adult mentor left on “DWTS: Juniors” who has won a Mirror Ball Trophy. The team she’s mentoring includes her little sister Rylee Arnold, who could be on her way to winning a Mirror Ball way faster than Lindsay did. Clearly winning runs in the family.

It has been a good couple of years for the Arnold clan. Lindsay’s dance breakthrough came at age 18 when she appeared in season nine of “So You Think You Can Dance,” where she reached the Top 8. Then she joined “DWTS” as a pro, and after six seasons there she finally won the Mirror Ball Trophy in season 25 with Jordan Fisher in the fall of 2017. As it so happens, Fisher is now the co-host of “DWTS: Juniors.”

This past summer their middle sister Jensen Arnold followed in Lindsay’s footsteps by competing on “SYTYCD,” but she made it even farther. She narrowly missed winning the whole thing, finishing second behind Hannahlei Cabanilla.

Now Rylee has gotten into the competitive spirit on “Juniors.” She has been dancing all her life and has trained in multiple styles with her specialty being Latin ballroom, just like her older sisters. She’s paired with “Black-ish” star Miles Brown as her celebrity partner, and together they have accumulated the highest judges’ scores of any couple in the competition and have topped the leaderboard four times over seven weeks.

Will they go all the way? The semi-finals are on Sunday, December 2, and despite their love from the judges they currently rank third in our Mirror Ball predictions with 19/5 odds based on the combined forecasts of Gold Derby users. But even if she doesn’t win the title on her first try there’s always next year if ABC brings the show back for another round. As Lindsay showed, if at first you don’t succeed, try, try, try, try, try again.