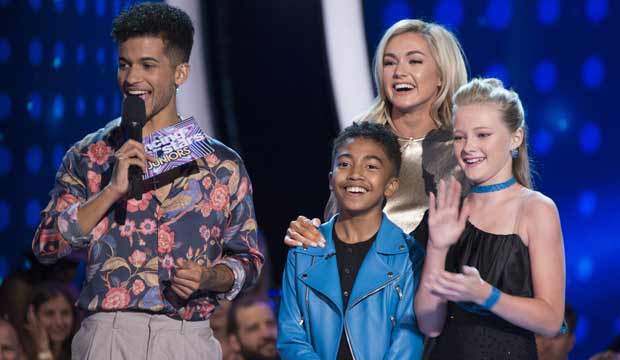 Twelve young couples took to the floor for the first episode of “Dancing with the Stars: Juniors,” but only 10 of them made it out of premiere night. So now that you’ve seen what the contestants have to offer, who will make it all the way and who was cut down in the second week of competition? Find out below in our live blog with all the minute-by-minute updates as the night progresses.

Two kid celebs were eliminated in week one: political scion Tripp Johnston (grandson of Sarah Palin) and “MasterChef Junior” champ Addison Osta Smith. Those results were half-determined by the votes of the studio audience (“DWTS: Juniors” is pre-taped, so the TV viewing audience doesn’t factor in), but Smith and Johnston were also the lowest scorers on the judges’ leaderboard, so fans in the stands may have been influenced by the input of panelists Mandy Moore, Val Chmerkovskiy and Adam Rippon.

With Smith and Johnston out of the running, the lowest scoring contestants remaining are reality star Alana Thompson (aka Honey Boo Boo) and Disney Channel actor Jason Maybaum. Does that mean they’ll be the next to go? Not necessarily. Since the week one results were based on that night’s judges’ scores combined with studio audience votes, those scores were wiped clean going into the second week of competition. If Maybaum and Honey Boo Boo were able to improve on their premiere night results they stood a good chance of sticking around.

So what happened on week two of “DWTS: Juniors”? Find out below starting at 8:00pm (all times listed are Eastern).

8:00pm — It’ll be interesting to see how this week’s results shape up. Last week, without a viewing audience weighing in, the in-studio audience sent home the two lowest-scorers. Will that continue this week, or will the fans disagree with the judges?

Mackenzie Ziegler and Sage Rosen: 2004 (Quickstep, “Are You Gonna Be My Girl”)

8:03pm — Another impressive performance by Mackenzie. Though I still think she’s a little too polished for an amateur kids’ show given her extensive dance experience.

JUDGES — Mandy says, “You are a new girl this week. That was so good!” Adam adds, “You 100% delivered on [more choreographic content].” Val concludes, “You totally killed it. That was incredible”

8:05pm — Another solid routine by Sky. She nailed the choreography. Though she seemed fairly careful at times, a little tentative.

JUDGES — Adam thought it was “so clean.” Val adds, “You can do anything … You have incredible maturity and you’re so much fun to watch.” And Mandy concludes, “Your face is on point. I thought your execution was amazing.”

8:08pm — She’s in second place after two dances. Based on those routines, I think that’s the right outcome.

8:09pm — The series premiere was 12 performances in 2 hours. Tonight is 10 performances in just 1 hour, so it’s a lot more fast-paced, and the clip packaged for each contestant is fairly abrupt. It’s a-mile-a-minute tonight.

8:13pm — Taylor Swift is a few years younger than me. Sophia is dancing to a song Swift released when Pippen was born. Okay, I now officially feel old. Pippen is a lovely performer, thought I thought this performance needed a bit more expressiveness. Like last week, I think she has what it takes, but need to come out of her shell more.

JUDGES — Val says, “That was incredible. You looked like a real-life Disney princess.” Mandy adds, “Well done,” but she wants Sophia to use more of the muscles from her back to extend her arms. Adam concludes, “Your steps are beautiful,” but she wants Sophie to step it up on a performance level.

8:16pm — A solid performance by Jason, an improvement on his first-week dance. I think he has tons of personality and charm, and while he could still use a little more polish, I think he’s on the right track and I hope he sticks around.

JUDGES — Mandy says, “I was in love with all of the presence and the poise you had” — and then he asks her to define exactly what poise means. Adam adds, “I love the confidence … It comes from the heart.” Val concludes, “You really pulled off those pants, and you pulled off the jive even better.

8:25pm — An impressive, athletic week-two performance, but there wasn’t much actually salsa in it.

JUDGES — Adam says, “That performance was more of a freestyle, but the performance — it was off the charts. Val wants him “to embrace the genre a little more.” Mandy wanted more musicality

8:28pm — Great choreography, and an actually recognizable paso doble. Adorable, though a little stiff and clunky in places. He was stronger in week-one, but this was another solid effort.

JUDGES — Val says, “You killed it.” Mandy adds, “I could see … all your muscles. You embodied the character.” Adam concludes, “You guys look like a really great partnership … The next step for you is to loosen up.”

8:31pm — In general, the performances tonight have been mixed so far. A lot of the most promising performers from the premiere episode have been a little less dynamic the second time around with only Mackenzie improving on her debut performance, which may be because Mackenzie has more dance experience than her competitors.

8:35pm — By far the best performance of the night thus far. He took the promise of week one and doubled down on it. Dynamic, perfect execution, and the perfect attitude.

8:38pm — I thought this was an improvement on the premiere episode, though I still think Alana is doing more shimmying than actually dancing.

JUDGES — Adam thought she “owned it,” though at moments she looked like she was just walking around the mall. Val was “really proud.” Mandy noticed she had a timing problem and needs to follow her partner more.

8:41pm — The lowest score of the night so far, but I can’t fault the judges. I think they got it right on this one. Honey Boo Boo is leaning heavily on her personality, and I’m not seeing enough of the choreography from her.

8:46pm — Solid timing and musicality from the youngest dancer in the competition, and he’s still irresistibly charming, though he’s still pretty rough around the edges. He needs to step it up a bit more, but I’d like to see him get at least another week to polish his moves.

JUDGES — Mandy says, “We love you. You are not shying away from any of this,” and she loved the tutting, which Akash admits he learned from YouTube. Adam adds, “You perform from your heart” and makes the audience “feel something.”

8:49pm — Fair scores from the judges. They like him, and so do I, but they’re not overlooking his technique shortcomings.

8:50pm — A difficult, uptempo song by Avril Lavigne to dance a complicated jive too, but I think she was up to the challenge. This was my second favorite routine of the night after Miles Brown.

JUDGES — Mandy says, “You are really good, little missy, so I hold you to a different standard. Did you raise to that standard? The answer is, yes!” Adam dives a standing ovation as his commentary. Val thinks, “If you’re not the couple to beat,” they’re one of just a few couples leading the way in this competition.

8:57pm — Three-way tie at the top of the judges’ leaderboard with Miles and Mackenzie.

8:58pm — The eliminated celeb is … Hudson West! That’s pretty surprising since he had one of the better scores tonight. I thought Jason Maybaum or Honey Boo Boo might be in trouble, or maybe even Sophie Pippen since her scores were a big step down from week one. I guess the studio audience isn’t just going by the judges’ scores after all.

Who will be eliminated? Hudson West

Who will get the judges’ HIGHEST score? Miles Brown, Ariana Greenblatt and Mackenzie Ziegler (24)

Who will get the judges’ LOWEST score? Alana Thompson

Which judge will give the MOST points? Adam Rippon (75)

Which judges will give the FEWEST points? Val Chmerkovskiy and Mandy Moore (72)