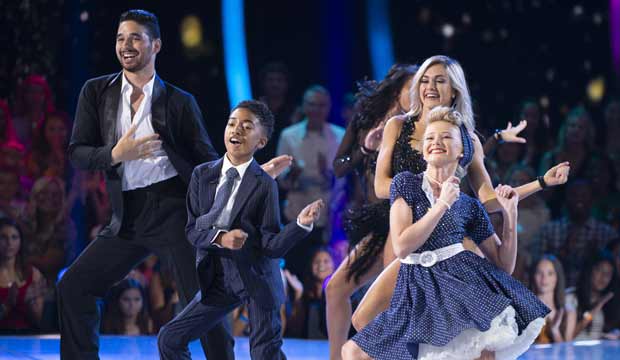 Episode seven of “Dancing with the Stars: Juniors” was a night for some wibbly-wobbly dancey-wancey stuff. That’s right, it was time for time travel. On Time Machine Night, the remaining five child contestants performed routines mostly to celebrate an era before any of them were born: the 20th century — yeah, we feel old too. So who had the best time, and who just wasted their time? Follow along with our live blog below for all the minute-by-minute developments as they happen.

The adult version of “DWTS” ended its season on November 19 with a, shall we say, controversial ending, but going into “Juniors” on November 25 there were still five celebs in the running, all of whom actually have higher judges’ scores than the adult winner Bobby Bones did. “Black-ish” star Miles Brown was the judges’ favorite going into Time Machine Night based on his season-long scores, but still hadn’t gotten a 10. Singer and “Dance Moms” alum Mackenzie Ziegler has been a consistently strong performer. “Avengers” actress Ariana Greenblatt and skateboarder Sky Brown both broke through in recent weeks with the season’s highest-scoring routines. And Stevie Wonder‘s son Mandla Morris seems to have gotten his groove back after a few uneven weeks.

Our users have been predicting the “Juniors” results every week, and they’re still betting on Sky Brown to claim the Mirror Ball Trophy; she gets leading odds of 10/3 after topping the leaderboard for the first time on Giving Thanks Night. And our forecast said Mandla Morris was the likeliest to be sent home in fifth place. Were we right? Find out below starting at 8:00pm (all times listed are Eastern). Comment at the bottom of this post and here in our message boards to let us know how you think the final “Juniors” contestants compare to their grownup counterparts.

8:03pm — My favorite team of this competition taking on a jive dance. Miles is excited to channel the era of diners and jukeboxes, and I think his energy and precision will make this a great routine.

8:05pm — That might have been my favorite performance from Miles. Tons of difficult choreography, perfectly timed and in sync with his partner, and without a step out of place in their husband-and-wife sitcom routine. Bring on some 10s.

JUDGES — Mandy Moore says, “You are here for the win, and I love that … You had awesome side-by-side synchronized movements.” Adam Rippon adds, “You had a moment and tonight you seized it.” And Val Chmerkovskiy concluces, “You’ve got so much soul … You were born to do this,” and Rylee has been an “incredible partner.”

8:09pm — I was a little worried there after those first two 9s came out. What does this guy have to do to get some 10s? Even the 28, his all-time best score, felt a little conservative to me.

8:14pm — Mackenzie was born in 2004, so she knows “nothing about the ’80s.” Well, they’re not going that far back in time for the song, which is a lot younger than she is. This clip package feels fairly rough, though. Gleb is coming off as kind of a mean task-master. “Prove it to me that you deserve that perfect score with your performance,” he tells his charges.

8:17pm — The dance felt a little chaotic, which I think may have more to do with the choreography than the actual dancers, who seemed spot-on throughout.

JUDGES — Adam thinks Mackenzie is “giving 100%, but I don’t think you’re letting go.” He wants a little bit more oomph from her. Val agrees with Adam that Mackenzie is “incredible … but dance for me is about touch, move and inspire … I’m waiting for that moment.” But Mandy says, “Well I was moved by that … I thought you had great content,” but she had a “couple of little bobbles technically.”

8:19pm — I think the judges make a good point about her still being very contained. She reminds me a bit of Alexis Ren on the adult side: impeccable technique, but not as much emotional connection.

8:25pm — I think Mandla has been improving in recent weeks, but I’m a little worried about Cheryl’s idea for a wormhole, brainwashing paso doble idea. Just the phrase “futuristic paso doble” concerns me. Sounds like a tough sell.

8:27pm — Not as clean and precise as it could have been, but Mandla did better with the choreography than I was expecting, and he showed the kind of emotional command that he needed. Once you get past the weird high concept, it was a solid routine.

JUDGES — Val thought there were “moments where you hit it hard and you hit it will,” but he wishes there were “a little more fight in that.” Mandy thought there were some technical problems, but she appreciated his passion, “so Mandla, I thought that was very good.” Adam says that what he has done without past dance experience is “incredible,” and “I’m not mad at it” if that’s what paso looks like in the future.

8:30pm — A good score, but the level of competition in this final five is so high that I think he’s probably going to be at the bottom of the leaderboard. And performing right smack dab in the middle of the show he might get lost in the shuffle and not get the studio audience votes he needs to stick around.

8:36pm — Ariana is going to be a “1940s model,” and Artyon is playing the photographer. But Ariana has no real concept of the character she’s playing, so it’s time to play dress-up. Hopefully she actually learned the dance too during training week.

8:39pm — I thought Ariana had good footwork for the most part, but this wasn’t my favorite dance from her. I think it might have mostly been because of how poorly I thought the music conveyed the character of the dance. The music really clashed with the mood for me.

JUDGES — Mandy thought it was a “very good” quickstep. Adam felt they were “always on timing … You are a performer I am here for. That was great.” And Val concludes, “You’re a star.”

8:43pm — Well deserved scores. Though Ariana said when chatting with Frankie Muniz that her favorite actress is Audrey Hepburn and her favorite movie is “Breakfast at Tiffany’s” — that’s ’60s, but I’m buying that she was so baffled by the existence of the 1940s. This girl is savvy.

’20s Charleston – “A Little Party Never Killed Nobody (All We Got)” by Fergie feat. Q-Tip and GoonRock

8:47pm — She got the highest score of the season so far, and they’ve got her closing the show, so it feels like “DWTS: Juniors” is all-aboard the Sky train. But she says she doesn’t care about the scores, she just likes hanging out with JT and Alan. Okay, I’m not entirely sure how much she’s playing up her adorableness for the cameras, but dammit it’s working. And JT might be my favorite junior pro.

8:50pm — Sky has dynamite athleticism, timing, and personality, and this routine was no exception. Another anachronistic music choice, but that fit so much better with the flapper theme of that routine — it was used in Baz Luhrmann‘s “The Great Gatsby” after all.

JUDGES — Adam says, “You bring so much joy … You’ve become such a role model on this show. If you work hard, you can be good at anything … I look up to you too.” To which Sky says, “If you want to do something, just do it!” Val adds, “You’ve got it … You’ve got presence, charm, commitment … You’re a star and you belong on the dance floor.” And Mandy concludes, “I definitely want to be invited to that party,” but sometimes she wasn’t quite on the beat. And Sky gives an additional shout-out to Alan and JT. Dammit, Sky, stop being adorable! She not only makes some other dancers look bad, she makes all other children everywhere look bad.

8:54pm — I thought those scores were right. This was my second favorite routine of the night behind Miles’s — which I still thought should have gotten one or two more 10s — and that’s how the judges scored it.

8:59pm — Sad to see him go since he had a good run, but this season has been so competitive, and I think the best four celebs have gone through. Wish I could have said the same about “Dancing with the Stars: Senior.”

9:00pm — It’s so like Sky that she’s actually crying about this elimination more than Mandla. That girl could out-nice Malala.

Who will be eliminated? Mandla Morris

Who will get the judges’ LOWEST score? Mandla Morris (24 out of 30)

Which judge will give the MOST points? Adam Rippon (45 out of 50)

Which judge will give the FEWEST points? Mandy Moore (43 out of 50)