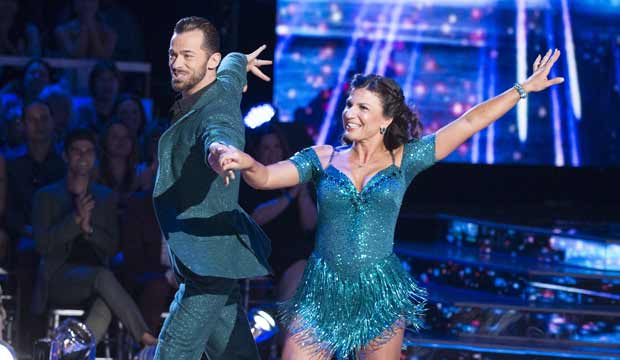 “Dancing with the Stars” ended another arduous two-night event with Las Vegas Night on Tuesday, October 2. And though Paralympic skiier Danelle Umstead performed a quickstep to “Luck Be a Lady,” it turned out that lady luck wasn’t on her side. The visually impaired athlete’s journey ended as she became the second celeb eliminated from the competition. So why didn’t America support her as much as past “DWTS” contestants with disabilities like past winner Nyle DiMarco (season 22), who was deaf, or finalists Amy Purdy (season 18) and Noah Galloway (season 20), who were both amputees?

It’s possible that Umstead’s disability was an even greater challenge than anyone else has faced on the show. If you can’t hear the music you can still learn steps you can see. And amputees are able to dance with the aid of prosthetics. But blindness makes it especially difficult to learn the ins and outs of choreography, especially for dances not in hold with your sighted partner.

That said, while Umstead never got a chance to climb the judges’ leaderboard, she consistently performed better than Joe Amabile, who is showing gradual improvement but got the lowest combined score for the third time in a row: 18 out of 30 for his Vegas Night jazz number, compared to Umstead who scored 19. But Amabile’s fan base has proven remarkably dedicated to him thus far, and Umstead didn’t have the name-recognition to carry her through with viewer votes.

Not only was the bottom celeb the same when it came to the scores, so were the top stars. There was a three-way tie for the top of the leaderboard on Monday’s New York City-themed show, and Tuesday’s show had the exact same three-way tie with the exact same marks from the exact same judges; if you saw that coming you really should try your luck in Vegas. Milo Manheim (tango), Juan Pablo Di Pace (foxtrot) and Tinashe (cha cha) each received 9s from Carrie Ann Inaba and Bruno Tonioli and an 8 from Len Goodman, once again giving them totals of 26 out of 30 for the night.

SEEWho do you want to see win Mirrorball No. 3 on ‘Dancing with the Stars’: Cheryl Burke or Val Chmerkovksiy?

Meanwhile, a contestant who made a big splash in the season premiere episode continued to lose ground. Football star DeMarcus Ware topped the leaderboard on night one, and for Vegas Night he delivered a solid quickstep, but was chided for his posture. He ended up with a score of 23 out of 30, so he hasn’t actually lost much ground in terms of his actual numbers (he received 23 in the premiere and 24 on New York City Night). But in a season where other contestants have so rapidly improved, he’s not keeping up; that score left him in seventh place for the night.

Bobby Bones isn’t keeping up either, even though the fun-loving radio host has one of the most infectious personalities of the season. Instead of improving, he started to backslide. Following his scores of 20 on premiere night and New York Night, he got a 19 on Vegas night for his quickstep, which tied him with ousted Umstead for second to last on the leaderboard. The judges appreciate his enthusiasm, but they’re still waiting for him to bring the technique to match.

PREDICTDancing with the Stars 27: Week 3

Check out the complete judges’ leaderboard below. How did you do predicting this week’s two-night show?

Who will be eliminated? Danelle Umstead

Who will get the judges’ HIGHEST score? Juan Pablo Di Pace, Milo Manheim, Tinashe (52) — combined for both nights

Who will get the judges’ LOWEST score? Joe Amabile (35) — combined for both nights

Which judge will give the MOST points? Carrie Ann Inaba (185) — combined for both nights

Which judge will give the FEWEST points? Len Goodman (173) — combined for both nights