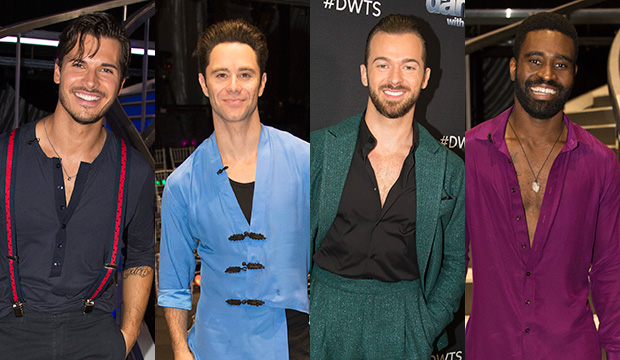 Sharna Burgess finally won “Dancing with the Stars” with a partner she probably never expected to win with, Bobby Bones, and that means the 12-season veteran and former four-time finalist can at long last shed her bridesmaid status. So to whom does that label go next? Of the current cast, four pros have been on at least five seasons and they all just so happen to be dudes. This makes sense since Burgess was the only female pro who hadn’t won on Season 27 and Val Chmerkovskiy was the only male pro who had won. So which of these four guys would you like to see win next?

The “oldest” of these four, in terms of their inaugural seasons, not tenures, is Gleb Savchenko. He made his pro debut in Season 16, along with Burgess and Lindsay Arnold, and finished in 10th place with Lisa Vanderpump. He didn’t return to the ballroom again until Season 23, earning his best finish, fourth place with Jana Kramer, and has been on every installment since. Season 27 was the first time he was eliminated first, with Niki Glaser. TPTB were probably hoping Savchenko would be as popular as another hot (not to mention hot-headed) Russian, Maksim Chermkovskiy, but he hasn’t caught on in the same way.

Sasha Farber joined “Dancing” in Season 17, the same time as his then-girlfriend and future wife Emma Slater. He made it to eighth place with Nicole “Snooki” Polizzi, but then was relegated to the troupe for the next four seasons. Farber was promoted back to pro in Season 22 and has only missed Season 25 since then. He was on an upwards trajectory, finishing seventh in Season 22 with Kim Fields, fifth in Season 23 with Terra Jole, fourth in Season 24 with Simone Biles and third in Season 26 with Tonya Harding before placing ninth this season with Mary Lou Retton. Biles was his best chance for a win before that shocking elimination. Farber is one of the most likable pros — can you imagine anyone else working that well with Tonya Harding? — and since Slater won Season 24, it would be nice to see him get a matching Mirrorball like some other real-life “Dancing” couples have done.

Artem Chigvintsev won “Strictly Come Dancing” in his first season as a pro in 2010, but he hasn’t had the same luck stateside. Since joining “Dancing” in Season 19, he’s only missed Season 21 and has gone as far as sixth place, which he did twice with Lea Thompson (Season 19) and Nancy Kerrigan (Season 24). Chigvintsev has the misfortune of being axed in double eliminations three seasons in a row with Kerrigan, Nikki Bella in Season 25 and Jamie Anderson in Season 26, which was also the first time he left the first week. Chigvintsev has had some partners with potential, but no one who’s stood out as a frontrunner. Season 27 could’ve been a breakthrough season for him, depending on what he could accomplish with Danielle Umstead, the show’s first blind contestant, but they were eliminated second. He’s the only one of these four who has not made a semifinal yet.

We all know Keo Motsepe‘s story, right? Poor guy was eliminated in the first week three times and in the third week twice. Save for Season 23, he’s been on every installment since Season 19, but Season 27 was when he went where he’d never gone before: to the semifinal and final. Being paired with a good dancer and student like Evanna Lynch helps, but Motsepe also met the moment with some inspired choreography. His third-place showing with Lynch is the best finish of these four in a regular season, and depending on who you ask, that Mirrorball should have their names on it.