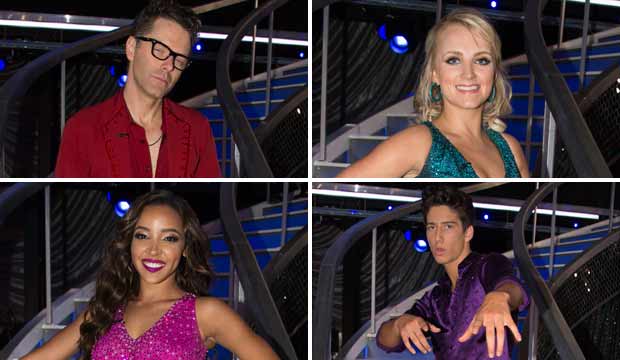 “Dancing with the Stars” continued its 27th season by honoring the city that never sleeps. New York City Night followed a stressful two-night premiere event that ended with the elimination of stand-up comic Nikki Glaser. There’s going to be a double elimination in week two based on these New York performances, so which Big Apples were delicious and which were rotten to the core?

Well, if you were looking for a clear front-runner to emerge after the week one tie between R&B singer Tinashe and football star DeMarcus Ware at the top of the judges’ leaderboard, we didn’t quite get it. This week there were three celebs on top. Once again, Tinashe was one of them, dominating the dance floor with a futuristic Argentine tango full of some of the night’s most difficult and death-defying tricks. So if nothing else she has emerged as one of the most ambitious performers of the season, but she was matched by two different stars this time around, so the season is as competitive as ever — maybe even more than we originally thought.

Juan Pablo Di Pace impressed the judges in week one with his salsa. This time he transitioned to a quickstep and did even better, picking up 9s from Carrie Ann Inaba and Bruno Tonioli and an 8 from Len Goodman, giving him a total of 26 out of 30. Milo Manheim got the very same scores from the same judges for his own dramatic change of pace: he traveled to Charleston in week two (by way of the Manhattan subway) after his cha cha in week one.

But while that trio owned the top of the leaderboard, that stickler Goodman saved his highest score of the season so far for model Alexis Ren, who danced an Argentine tango just like Tinashe did, but Goodman thought it was the best dance of the season so far and gave her his first 9. But Inaba and Tonioli gave her 8s, so her total score of 25 fell just short of the top spot. That might be because of a momentary wardrobe malfunction during her routine — that darn tearaway tutu just wouldn’t cooperate.

SEEGrocery Store Joe has the goods to go further on ‘Dancing with the Stars’ than any male ‘Bachelor’ star has, readers say

But those celebs mostly excelled in week one as well. What about the contestants who were trying to redeem themselves. Chief among those was Joe Amabile. The dancer formerly known as Grocery Store Joe on “The Bachelorette” and “Bachelor in Paradise” had two left feet when he debuted in the ballroom with his messy quickstep. He was still stuck at the bottom of the leaderboard in week two, but this was actually a big step up from opening night. His foxtrot scored 17 out of 30; he would have gotten 18, but Inaba docked him a point for an unauthorized lift.

Actress Nancy McKeon wound up in the bottom two after judges’ scores were combined with viewer votes last week. But once again she kept up with her esteemed pro partner Val Chmerkovskiy, this time on a cha cha, which got her 7s across the board for a total of 21.

SEEDoes ‘Dancing with the Stars’ have a new front-runner? DeMarcus ties Tinashe in our odds, and we explain why [WATCH]

“Harry Potter” co-star Evanna Lynch was safe from elimination in week one, but she still returned to the dance floor with something to prove. Stingy Len Goodman gave her a 5 for her debut foxtrot. In week two the producers gave her an even more difficult dance: the samba is notoriously tricky and has been kryptonite even ffor the show’s best contestants. But she not only improved on that 5, she got straight 8s from the panel for a total of 24, landing her in the top five for the night.

See the complete judges’ leaderboard below. Who do you think will be eliminated this time? It’s a high-stakes game with a double elimination looming on Tuesday night. How fitting, then, that Tuesday is Las Vegas Night.

PREDICT‘Dancing with the Stars’ now; change them until Tuesday night’s show

Be sure to make your predictions so that the contestants can see how they’re faring in our racetrack odds. You can keep changing your predictions until just before the next episode airs on ABC. You’ll compete to win a spot on our leaderboard and eternal bragging rights. See our contest rules and sound off with other fans in our reality TV forum. Read more Gold Derby entertainment news.