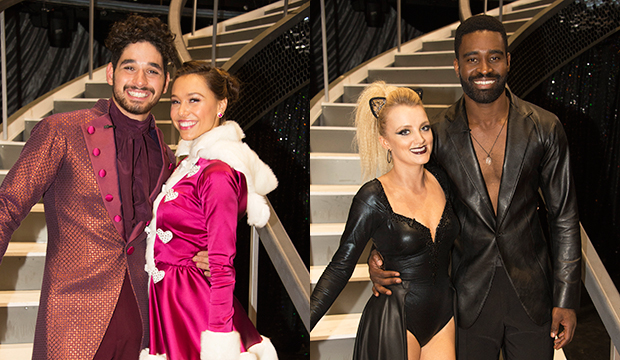 Country Night could be a historic evening on “Dancing with the Stars.” Never before has the show had a top six comprised of one gender, but with a double elimination on tap, we could be left with six guys by the end of the night. However, 55 percent our readers believe one of the two ladies left, Alexis Ren and Evanna Lynch, will make it through.

Ren and Lynch are two of the best dancers and top scorers, but that means little on this show, especially when only women have been eliminated so far this season. If one of them survives, it’s likely to be Lynch. Per our predictions, Ren is the second most likely to be eliminated on Country Night, behind Joe “Grocery Store Joe” Amabile. Unlike Lynch, the Sports Illustrated model has already been in the bottom five the first week (to be fair, Tinashe wasn’t in the bottom five either and she got booted in Week 4) and has been “in jeopardy” the past two weeks, a sign that TPTB wants to drum up more support for her.

SEE Double trouble on ‘Dancing with the Stars’: The two Country Night eliminations will be…

Another sign? Her out-of-the-blue showmance with Alan Bersten, which has left a bad taste in some fans’ mouths. If people were considering voting for her before, they might not after that. Ren also came into the show with less of a voting fan base than Lynch, who has the “Harry Potter” fandom behind her.

The results are almost dead even after that: 23 percent think both Ren and Lynch will make the top six, while 22 percent think they’ll both be eliminated. The latter definitely would not surprise anyone given how the season is going. But assuming one of the eliminated guys is Grocery Store Joe, who would be the second? John Schneider and Bobby Bones are tied in third in our predictions and are the other two weaker men left. Schneider got thrown under the bus hard last week by the judges despite a pretty decent dance. Was the show desperate to dump a guy that Schneider was picked to be collateral damage? That’s what those scores feel like, but those scores might’ve also spurred fans to vote for him more.

Or maybe we’ll get a total shocker and one of the top three men — Juan Pablo Di Pace, Milo Manheim and DeMarcus Ware — will be the second guy.