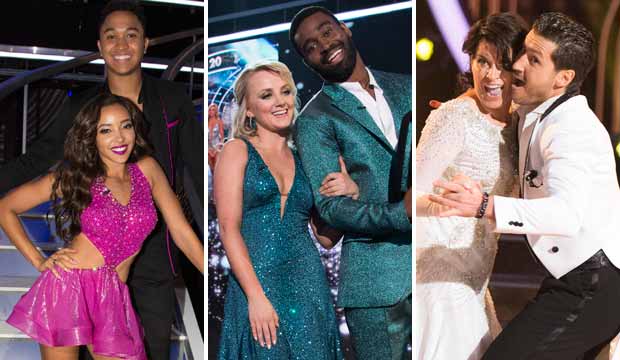 Monday was premiere night for season 27 of “Dancing With the Stars,” and the 13 celeb contestants hoped to make a great first impression on the judges and viewers. At the end of the night it was R&B star Tinashe and retired NFL player DeMarcus Ware who shined, ascending to the top of the judges’ leaderboard with scores of 23 out of 30, while former “Bachelorette” contestant Joe Amabile fizzled at the bottom with a score of 14.

But despite that wide divide between the top and bottom dancers, I thought it was one of the better premiere nights overall. Check out my rankings of all 13 performances below to see who I thought brought down the house and who needs to retire their dance shoes.

SEE‘Dancing with the Stars’ season 27 premiere recap: Which celebs blew us away when 2-night premiere kicked off? [UPDATING LIVE BLOG]

Tinashe lived up to the hype as the one to beat. Her jive was energetic, full of attack and contained lots of strong choreographic content. Brandon did a great job of putting together a routine that was up to her skill level. There were parts that were a bit sloppy, but it goes to show that she isn’t perfect right out the gate, which might actually endear her to the judges and fan voters given her extensive dance experience.

Going in I pegged Alexis as potential cannon fodder, but boy was I surprised. Her jive was clean, precise and lighthearted. Both Alexis and Alan were in sync throughout the dance and had great chemistry. Alan just needs to work on drawing out more of Alexis’s personality in the dance.

Those dang Disney kids know how to make an entrance on this show. Milo has the moves, energy, and charisma to make it very far in the competition. His cha cha was pretty fast-paced and with lots of hip action. So he could very well be a potential dark horse this season.

Go ahead and pencil DeMarcus in for the finals. His cha cha had swagger and entertainment. Lindsay excels at choreographing to her partners’ strengths, and for DeMarcus that’s his charming personality. There were some wonky moments during his routine, and I personally didn’t think he should’ve tied with Tinashe for the top score, but overall it was a great first outing.

I thought Mary Lou did a great job, especially for the first performance of the night. First off, she looks amazing at her age, and I loved the confidence that she exuded. She was a bit ahead of the music at times, but made up for that with her impressive hip action and musicality.

I was a bit disappointed with his performance. I expected to be blown away, but was left a bit cold. I thought he danced well, but it was lacking the passion and liveliness of the salsa. The 8 he got from Bruno was a bit much. I’ll need to see a few more dances from him to see if he’s truly a contender or not.

SEEYikes! Was ‘Grocery Store Joe’ as bad on ‘Dancing with the Stars’ as the judges said? [WATCH]

Evanna has tons of potential. I thought her lines were great during her foxtrot, though I did agree with the judges that she needs to relax her shoulders. Hopefully she’ll be able to come into her own and flourish. But that 5 score from Len? Really? She deserved 6s and 7s for that performance.

While the dance was a bit frantic, Bobby actually held his own with Sharna. Although it wasn’t on the same level as Alexis or Tinashe’s jives, Bobby did a great job of selling it. There’s always that one contestant every season who the audience gets behind despite not being the best dancer. I’m willing to bet that Bobby will last in the competition for a long time. But I was a bit surprised by the 7s he got from Carrie Ann and Bruno. I thought he deserved all 6s.

SEEDid ‘Dancing With the Stars’ undercut its first blind contestant’s chances to stick around?

Danelle made “DWTS” history as the show’s first blind contestant. Overall I thought she performed a beautiful routine — a bit safe, but solid. And I loved seeing Danelle bring out a softer side of Artem.

I was a bit worried about Nancy going into the season premiere. I thought she would be stiff, but she actually surprised me. She kept up with Val, had great energy, and was fully committed to the dance.

John was another contestant I thought might be a train wreck. But he shocked me with his strong posture and his lightness on his feet. The foxtrot was the perfect dance for John to perform first as it was the right mix for him to add some of his own personality to the traditional ballroom steps.

I didn’t know what to expect from Nikki, but I give her major props for going out there and having fun. In terms of her technique, I can see her having a major breakthrough in the coming weeks provided she’s not eliminated before she gets the chance.

That was rough. He’s not a dancer, and I don’t see him becoming a contender. And I was glad the judges didn’t go easy on him. Hopefully, the casting department will stop wasting space on these “Bachelor” and “Bachelorette” contestants.

One would hope that Joe would get the boot, but due to the “Bachelor” nation fan base and the sympathy votes I think he’ll get for his last-place scores, he’ll probably be spared to dance another day. So I predict Nikki to go home with Evanna and possibly John also being in jeopardy.