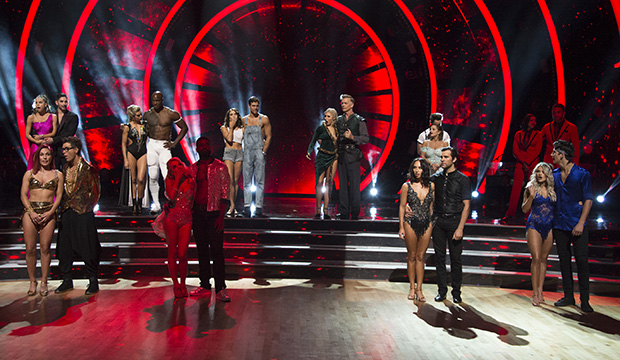 Tinashe got the boot on Week 4 of “Dancing with the Stars” despite having the second highest score of the night. But, as of press time, she definitely is not in the top two when it comes to YouTube views. Numbers were down overall this week — compared to last week when six couples had more than 100,000 plays — since it was just trios and not a bunch of reach-for-the-Kleenex sob stories.

Milo Manheim and Witney Carson with Riker Lynch
Salsa: 292K
Milo had the showstopper of the night and the highest score of the night, and is definitely looking like the one to beat right now even if he has yet to have a perfect score to his name (oh, it’s coming). Frankly, we’re kind of surprised this number isn’t higher since Riker has his own force of teen fans.

Alexis Ren and Alan Bersten with Maddie Ziegler
Tango: 236K
The model’s fans continue to come through with the video views, but as always the question is if they’re also voting. Let’s hope so after Tinashe’s shocker.

Joe “Grocery Store Joe” Amabile and Jenna Johnson with Jordan Kimball
Salsa: 179K
How many people who watched this train wreck do you think wish they could get their 90 seconds back?

Tinashe and Brandon Armstrong with Amy Purdy
Tango: 80K
The singer departs the competition never having broken six figures in views (as of press time), in retrospect an indication that widespread support was not there despite some stellar performances.

DeMarcus Ware and Lindsay Arnold with Rashad Jennings
Paso doble: 74K
DeMarcus’ plays are on par with last week’s and it seems like he’ll stay in this range until he has a breakthrough performance. He’s still getting underscored, so it could be a few weeks before he sees a 30.

Juan Pablo Di Pace and Cheryl Burke with Melissa Rycroft
Cha-cha: 68K
Juan Pablo had a serious downturn in performance, scores and views after his lukewarm cha-cha. But this is actually the kind of numbers his previous dances were pulling in before that perfect 30.

Evanna Lynch and Keo Motsepe with Scarlett Byrne
Salsa: 67K
Evanna’s level continues to improve, but her plays took a huge dip this week. She was put in jeopardy, which doesn’t mean she was in the bottom two, but it ideally should scare fans into voting after what happened with Tinashe.

Mary Lou Retton and Sasha Farber with Nastia Liukin
Charleston: 58K
While the Olympic champ had her best performance of the season, her routines continue to be non-factors on YouTube.

Bobby Bones and Sharna Burgess with Lindsey Stirling
Cha-cha: 56.2K
For the first time, Bobby is bringing up the rear on this list and has not yet cleared 100,000 plays. This is his first low-key week of the season — he lost his mind in Week 1, flossed in Week 2 and had a heartstring-tugging story in Week 3 — so it appears like interest in him rises and falls with his antics/narrative on the show.