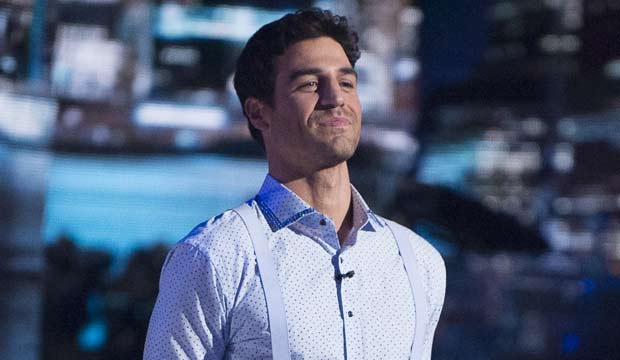 Tinashe, Milo Manheim and Juan Pablo Di Pace continued their hot streak on Las Vegas Night on “Dancing with the Stars” as they tied for the top judges’ score for the second night in a row. Meanwhile, Alexis Ren, Evanna Lynch, DeMarcus Ware and Mary Lou Retton proved to be worthy contenders as well with only a point or two between them and the top scorers.

Bobby Bones, John Schneider and Nancy McKeon saw a dip in their scores while “Bachelor in Paradise” star Joe Amabile achieved his highest marks yet, though he still landed at the bottom for the third consecutive time. But at the end of the night it was Paralympian Danelle Umstead who ran out of luck and was eliminated from the competition.

Were the judges’ scores spot on, or completely out of whack? Below are my personal rankings of who brought the heat to Vegas Night and who fizzled out, ranked from worst to best.

Was this really a dance? He didn’t do much during half of it, and the parts when he did move weren’t that great. Joe really needs to just let loose and have fun. It’s becoming a bit uncomfortable to see him not enjoying himself. He really needs to go home.

After suffering a misstep during their cha cha on Monday night Danelle and Artem wanted redemption with their Vegas quickstep. I thought the opening with the dance troupe was a nice creative touch, and Danelle seemed more at ease than she was on the previous night. It got her her highest score of the season, so even though she was eliminated, I was glad to see her leave on a high note.

The quickstep proved to be a challenge for Bobby. It was a bit hectic at times, but as usual he was entertaining. However, as Carrie Ann Inaba pointed out, we need to see a different side of Bobby or he may run the risk of his enthusiasm overwhelming viewers.

SEE‘Dancing with the Stars’ Las Vegas Night recap: Who hit the jackpot, and who will be leaving Las Vegas?

Another entertaining dance from John. But I agreed with the judges that this wasn’t as good as his dance on Monday night’s show. Although he kept up with Emma, the routine lacked the flicks and kicks needed for the jive.

I loved the opening — very dramatic. Initially I thought Nancy would struggle with this aggressive, passionate dance style, but she really brought it with her technique and attack. In my opinion, this was her best dance to date. I thought she deserved all 7s or maybe one 8 from the judges.

DeMarcus’s smile just lights up the room, and his quickstep had a lot of technical content in it. There were a few times when he and Lindsay were out of sync, but overall I thought it was a solid routine. Even though it resulted in a dip in their scores, I’m sure they’ll bounce back to the top of the leaderboard over the next few weeks.

SEEMake no (Bobby) Bones about it: Sharna Burgess is ‘mad at him’ for rogue flossing on ‘Dancing with the Stars’

Alexis felt pressure trying to master Alan’s choreography for this particular routine, but she needn’t have worried. She brought the house down with her salsa. It was full of proper salsa content and amazing lifts. But Carrie Ann was right that Alexis needs to work a bit more on her core strength as she was a bit wobbly towards the end of the dance.

The 50-year-old Mary Lou is showing these young’uns how it’s done. Her performance was full of fun and put a smile on my face throughout. Normally the samba is the dance of death given its technical difficulty, but Mary Lou brought it to life.

This week we’ve seen a different side of Evanna from the one she showed on premiere night. Both her Monday night samba and Tuesday night jive routines were full of energy and confidence. She’s still a little rough around the edges, but if she continues on this upward path she could be a potential dark horse to win the season.

SEEWho do you want to see win Mirrorball No. 3 on ‘Dancing with the Stars’: Cheryl Burke or Val Chmerkovksiy?

Juan Pablo is living up to his heartthrob status this season. His routine had a nice balance of steaminess without losing the essence of the foxtrot. Kudos to Cheryl for bringing out the performer in Juan Pablo.

Milo continues to impress. His tango proved that he can handle a serious ballroom dance and not just lighthearted numbers like his previous cha cha and Charleston. The dance was fast, full of attack, and had great technique. And he’s proving to be one of the more versatile performers of the season.

Another slam dunk performance. I love her and Brandon’s chemistry. And Brandon is on a roll with his top-notch choreography that showcases Tinashe’s talents. She’s a force to be reckoned with and deserves to have a spot in the finale.

SEE‘Dancing with the Stars’ week 2 rankings: What did the judges get wrong on New York City Night?

I’m hoping that it’s the end of the road for Joe next week. Out of all the remaining couples, he lacks the dance skills and the enthusiasm. But I can see John or Nancy going home instead.