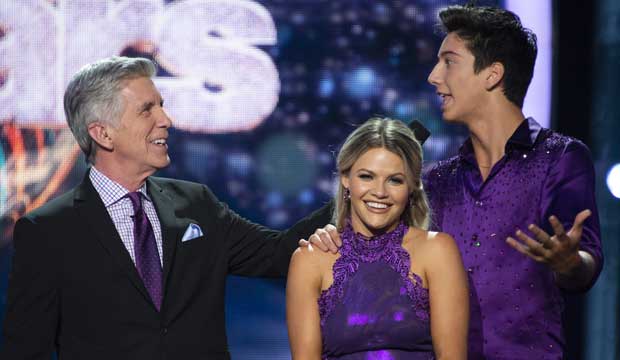 It’s week two of the competition on “Dancing with the Stars and Monday night’s theme was New York City Night, celebrating all things related to the Big Apple. At the end of the night Tinashe, Milo Manheim and Juan Pablo Di Pace saw their names in bright lights in a three-way tie for the top of the judges’ leaderboard while Grocery Store Joe fizzled out at the bottom for the second week. Did Tinashe, Milo or Juan Pablo deserve their high marks? Check out my thoughts below.

I thought he redeemed himself from last week’s disappointing quickstep. I agreed with Carrie Ann Inaba that the performance was a bit too slow and lacked technique, but it was a solid effort.

Danelle felt a bit overwhelmed with the speed of the cha cha, but I loved how Artem incorporated Danelle’s walking stick to ease her into the dance. I was initially worried how she would handle a Latin dance; she powered through like a champion despite a misstep early on.

Nancy had trouble with her feet and discovered she has a fractured toe. But she danced like she wasn’t in any pain whatsoever. Her performance was full of confidence and full of difficult technique.

SEE‘Dancing with the Stars’: Alexis Ren had a wardrobe malfunction, but Len Goodman thought she was the best of the season [WATCH]

You’ve got to love Bobby’s personality. He may not be the best dancer, but he’s a joy to watch. There were some parts of this foxtrot where he struggled, but he sold the dance throughout.

This was a beautiful dance. It was great to see Mary Lou let go and just be one with her performance, which was simple and clean without all the props, tricks and gimmicks we often see from “DWTS” routines.

John is a native New Yorker and hoped to make his fellow New Yorkers proud with his Charleston on the night dedicated to his city, and he continued to surprise me. This performance really captured that New York spirit. Much credit is due to Emma for her choreography.

SEE‘Dancing with the Stars’: Grocery Store Joe improved, so why did Carrie Ann Inaba stick him with the lowest score? [WATCH]

After topping the leaderboard last week DeMarcus and Lindsay continued to prove that they’re one of the couples to beat. And DeMarcus also showed that he isn’t a one-trick pony as his performance showed his elegance. I was surprised by how good his footwork was throughout the dance.

Evanna tried to show another side of herself after receiving a surprisingly low score of 5 from Len in week one. Who knew she had such a sassy side to her? Evanna brought her A-game with confidence and commitment to each movement.

Juan Pablo is in it to win it. Last week I thought he failed to live up to the hype, but this week was a different story. The routine was energetic and entertaining throughout. I agreed with Len Goodman that his holds could have been a bit tighter, but I thoroughly enjoyed it.

SEE‘Dancing with the Stars’ New York City Night recap: The city never sleeps, but which Big Apples were rotten?

Alan did a great job of creating a memorable routine to help Alexis stand out. I especially loved the ballet at the beginning. She looked stunning and took command of the dance. Now hopefully the viewers will rally behind them and keep them safe.

The Charleston was the perfect dance for Milo. From start to finish it was full of energy, fun, and excitement. I loved how he and Witney used the entire dance floor throughout the routine. Now it looks like we have a potential contender on our hands with this promising teenager.

Everything about this routine was amazing: the staging, the lifts and the choreography. Brandon and Tinashe’s chemistry is some of the best of this season. This was the performance of the night!

This week two celebs will be eliminated. I think Nancy McKeon will, unfortunately, be one of those contestants to go. Her landing in the bottom two last week showed she probably doesn’t have the fan support to escape the double elimination. But I’m torn over who will be the other star to go home: John Schneider, Danelle Umstead, or Joe Amabile? Despite her inspirational candidacy, I can see Danelle going home due to her low scores and limited name recognition, but John could get lost in the shuffle despite finishing in the middle of the pack.