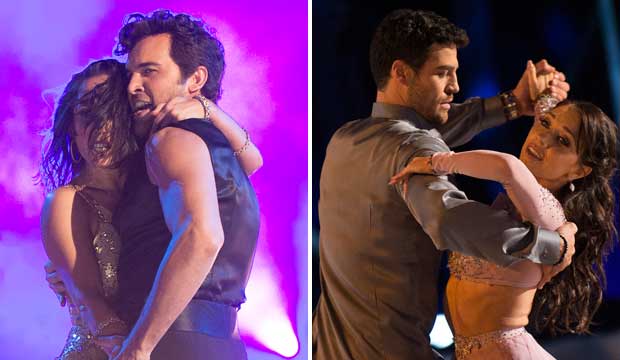 “Dancing with the Stars” is through week three of the competition, when each couple danced a routine highlighting the “Most Memorable Year” of their lives. This is always the most emotional week of the competition as it gives us the chance to see these stars at their most vulnerable.

In a night full of tears and celebration, actor Juan Pablo Di Pace and his pro partner Cheryl Burke were deemed the most memorable dance of the night, earning a perfect 30 out of 30 from the judges for their sizzling samba, while Tinashe, Milo Manheim and Evanna Lynch tied with their own highest scores of the season (27 out of 30). Meanwhile, Joe Amabile placed at the bottom of the leaderboard yet again, but managed to escape \elimination as “Facts of Life” star Nancy McKeon became the third celebrity to get the boot.

The “Most Memorable” night also proved to be one of the most competitive nights. But did the judges judge it correctly? See my rankings below, ranked from worst to best.

2018 was his most memorable year as he appeared on “The Bachelorette” and later fell in love. It was a commendable effort for the struggling reality star. I applaud him for really going for it, but it was still a bit stompy and stiff at times. However, with that said, this is the first week in which I felt he was comfortable on the dance floor.

John’s most memorable year was 2016, a year of love and loss as he met the love of his life around the same time that he lost his mother. John continues to impress me week after week. This dance was charming and heartfelt, and I loved how John led the dance and felt so free. But I agree with the judges that he needs to work on his frame; he lacks polish.

Nancy’s most memorable year was 2006, the year when her family was complete. Her rumba was simple and intimate. My only criticism is that she lacked the necessary hip action throughout parts of the dance.

Mary Lou’s most memorable year, predictably, was 1984 when she won gold at the Olympics. It was a proud accomplishment in Mary’s life, but it was emotional because she had to overcome a knee injury six weeks prior to the Games. Now 34 years later Mary Lou looked radiant. The dance was lyrical and full of sweeping arm movements and beautiful extensions. And she and Sasha were in sync throughout the dance.

1998 was the year Bobby commemorated; that was when he became the first in his family to graduate high school. I thought he killed it this week. I loved the storytelling in the dance, and it was refreshing to see a more subdued, vulnerable side of Bobby. This was by far his best performance.

Alexis’s memorable year was 2014, when she found out that her mother had stage-four cancer; she died a few months later. This was a breathtaking dance in honor of her late mother. I loved the musicality and emotion that she and Alan brought to the routine.

SEEDid DeMarcus Ware get screwed over by the judges on ‘Dancing with the Stars’?

Winning the Super Bowl with his children present in 2016 was DeMarcus’s most memorable year. And in celebration of that he delivered an intense and aggressive Argentine tango. I loved the lifts and thought DeMarcus did a great job with his footwork and technique.

17-year-old Milo’s most memorable year is this one, when his first movie, “Zombies,” premiered on the Disney Channel. Now he’s appearing on “DWTS” and he’ll soon be graduating high school. Well, he just graduated the jive too: it was slick, precise and smooth. He even kept up with with the experienced troupe dancers without missing a beat. At this rate, we should definitely look to him as a serious contender for the Mirror Ball Trophy.

SEEWhy the hell did the judges bust out a perfect score so early on ‘Dancing with the Stars’?

Tinashe’s most memorable year was 2014 when she released her debut album. I admired how elegant and smooth the performance was. And I was glad to see Brandon take a more stripped down approach to the choreography, keeping the focus on him and Tinashe instead of adding a lot of tricks and gimmicks.

Evanna’s memorable year was 2006 when she booked the role as Luna Lovegood in the “Harry Potter” film series. She credits the “Potter” books with saving her life as she battled an eating disorder as a preteen. As for the dance itself, holy moly! From beginning to end, Evanna was in control of every step and movement. Kudos to Keo for choreographing a well rounded and intricate dance. I’m so happy to see Evanna’s growth thus far.

SEE‘Dancing with the Stars: Juniors’ is doing Songs From the Year I Was Born in Week 2, so get ready to feel really old

Juan Pablo’s memorable year was 1999, when he moved to Los Angeles to chase his Hollywood dream, and he celebrated that milestone with a very lively dance. For many male celebs, the samba can be a major hurdle, but not for Juan Pablo. This samba had everything: sex appeal, hip action and entertainment. His perfect score was well deserved.

With three female celebrities out, it doesn’t look too good for Mary Lou Retton or Alexis Ren, who each placed in the bottom five during week one. But I personally think both might survive another week, leaving John Schneider as the first male celebrity to go this season.