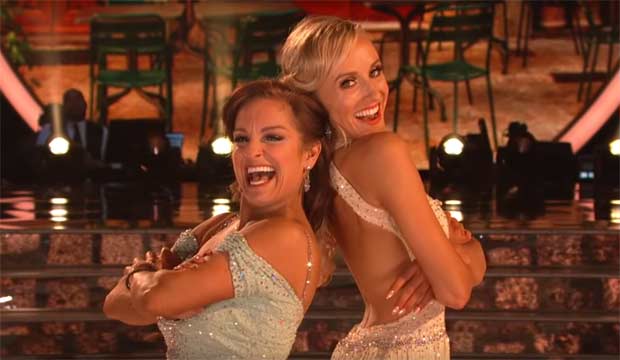 This week on “Dancing with the Stars” each couple performed a trio routine with a “DWTS” alum or a special celebrity guest. A new Mirror Ball front-runner may have emerged, as Disney star Milo Manheim along with her pro partner Witney Carson and trio partner Riker Lynch brought down the house with an electrifying salsa. The routine was just one point shy of a perfect score.

But as one star rose another was shockingly snuffed out: R&B star Tinashe and her partner Brandon Armstrong were unfairly booted despite topping the leaderboard in the first two weeks of the competition. With her out of the running, which of the remaining celebs will rise to the occasion and pose a serious threat to win the season?

See my rankings below ranked from worst to best: which trios sizzled, and which ones fizzled?

Yikes. There was no salsa content in this routine whatsoever. The timing was off, and both Joe and Jordan were stiff throughout the dance. At this point in the competition it’s time for him to bow out gracefully.

I loved the storytelling of this dance. John did a solid job with his footwork and posture throughout. I will say that the lifts were a bit messy, but it was nevertheless a great effort.

Bobby knows how to light up the room. There was not one ounce of cha cha in this routine, but despite that, I thought this performance was fun and entertaining, as they usually are from Bobby.

DeMarcus brought the necessary physicality to the dance, but I thought he was out-performed by Rashad. I was expecting this routine to be a knockout since this style has been a favorite of past NFL players, but it was a bit disappointing.

This was a very polished routine. Evanna has become more confident week after week. But I agreed with the judges that I would’ve liked to see a bit more hip action, and she was a bit ahead of the music at times.

After earning a perfect score last week, the pressure was on for Juan Pablo to knock it out of the park again. Overall I thought the dance brought the right amount of sex appeal, but surprisingly lacked cha cha content. I agreed with Carrie Ann that it felt at times that Juan Pablo was holding back.

Alexis is another contestant who continues to grow every week. Although her tango wasn’t as impactful as her contemporary routine on Most Memorable Year Night, I thought she, Alan and Maddie still did a great job of bringing the attack to their tango.

Tinashe and Brandon hoped to show a different side of themselves after being in jeopardy last week. Their routine with Amy was very clean, creative and incorporated a lot of tango content. I thought Brandon rose to the challenge as a choreographer and made not only Tinashe shine, but Amy as well. It stinks that Tinashe’s journey on the show ended so soon.

SEEMilo Manheim and Riker Lynch performed a ‘delicious’ salsa on ‘Dancing with the Stars,’ but was it perfect? [WATCH]

It was great to see Mary Lou let loose and have fun. She needs to keep reminding herself that this show is about living in the moment, and she doesn’t still need to be in the Olympic mindset of perfection at all costs. The routine was entertaining and lovely, and she earned her highest score of the season so far. Well deserved.

Milo did that! They brought down the house. This performance was fast, in control, clean and electrifying. I loved how Witney seamlessly moved back and forth between Riker and Milo throughout the routine. The dance of the night!

SEE‘Dancing with the Stars” DeMarcus Ware dislocated his finger, and these videos are definitely not for the squeamish

With the surprise elimination of Tinashe and Brandon, it looks like Alexis and Alan could be the next surprise ouster. Clearly the fans find Grocery Store Joe and Bobby Bones more entertaining than Tinashe and the other three female contestants who have already been sent packing.