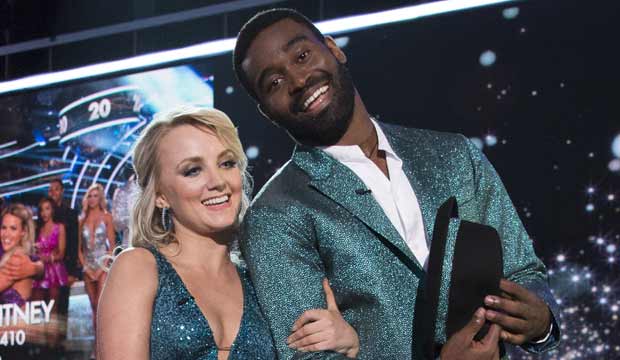 With one week until the “Dancing with the Stars” semifinals, the remaining eight couples performed one unlearned dance style and one team routine for Country Night before facing the first double elimination of the season. With the competition so tight, this season has proved that the judges’ scores can only take you so far.

Evanna Lynch was the belle of the ballroom, earning a combined 59 out of 60 points for her two dances, making her the top scorer of the night. Alexis Ren, Juan Pablo Di Pace, and Milo Manheim also performed perfect or near-perfect routines, cementing themselves as the best dancers left in the competition along with Evanna.

Meanwhile, the bottom scores of the season, Bobby Bones and Joe Amabile, continued to prove the naysayers wrong as they once again escaped elimination. Instead, it was lights out for John Schneider and DeMarcus Ware as they became the first male celebs to get the boot.

So which routines brought the southern charm and which ones needed to two-step their way off the dance floor? The judges had their say. Now check out my rankings from worst to best below.

I’ve never been the biggest fan of Grocery Store Joe, but I will say this is probably the most confident he’s been all season. With that said, it’s still miles behind the rest of the dancers left in this competition.

It was nice to see a more subdued performance from Bobby. I felt that this was his best this season. While he might not be the most naturally gifted dancer, he makes up for it with his dedication and enthusiasm.

SEEDid DeMarcus Ware get screwed on ‘Dancing with the Stars’ after his best dance? [WATCH]

This was a fun and lighthearted routine. You can really tell that John had a great time performing this, and I thought he did a great job of keeping up with Emma and troupe, though I’m not sure I agree with that 9 from Len.

The dance was elegant and smooth, and I loved how intimate it was. My one concern with DeMarcus was that he was fading into the background and really needed a showstopping routine to stand out from the pack. Unfortunately, he won’t get that chance since he was sent home.

Alexis and Alan need to stop with their showmance angle. It comes off as too desperate. Neverthelless, I thought their samba was pretty darn good. There was lots of genuine samba content, and Alexis had the right bounce. I only wished that they would’ve danced to a Latin track as the song they performed to, “Ladies in the ’90s” by Lauren Alaina, wasn’t cutting it.

The performance was full of energy, and I thought it made great use of the stage. As with Ren’s routine, their song (“One Shot” by Hunter Hayes) wasn’t the best for a Charleston, but they made the most of it. Is there any dance style that Juan Pablo can’t do?

SEETeam Joe Down on ‘Dancing with the Stars’: Was Grocery Store Joe’s group great, or past their sell-by date? [WATCH]

Milo has matured into a great dancer this season. This week I thought he delivered a proper and elegant foxtrot. I’m surprised by how he tackles each dance style with such ease. They should go ahead and give him and Witney the Mirror Ball Trophy now.

Holy crap! Evanna is in it to win it! This routine was breathtaking. She embodied the character of the dance and nailed the technique. She’s peaking at the right moment and could be a serious contender for the win. And it’s about freaking time she got a perfect score from the judges. Well deserved.

I thought it was a solid team number. There was a lot going on and felt a bit chaotic at times. But overall it was a fun dance.

This was a great routine! I loved it from beginning to end. The choreography was spot-on and showcased everyone’s strengths. I was a bit worried that Bobby would get lost in the shuffle, but he managed to keep up with his teammates.

SEE‘Dancing with the Stars’ Country Night recap: Which celebs had to giddyup and go in the double elimination? [UPDATING LIVE BLOG]

This season has proved to be one of the most unpredictable ever. Early on I had pegged DeMarcus as the one to beat, but he’s gone now one week shy of the semifinals. So at this point any of the remaining stars could go home except for Milo. I’m leaning towards Alexis with the possibility of Joe (fingers crossed) as the next celebrity to go.