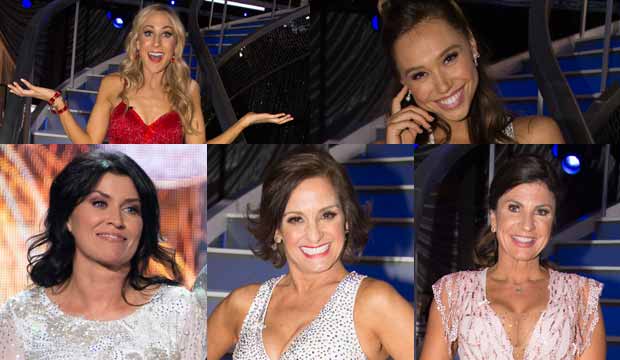 Season 27 of “Dancing with the Stars” just started, but it’s already not looking good for the women. The show doesn’t usually reveal who has the lowest scores after viewer votes are combined with the judges’ scores (besides the contestant who is eliminated, of course). But on Tuesday night there was a special dance-off to decide who would stay and who would go, so the show revealed the actual bottom celebrities. All of them were women.

Host Tom Bergeron started by announcing which six celebs had the lowest combined totals: Alexis Ren, Mary Lou Retton, Nikki Glaser, Danelle Umstead, Nancy McKeon and John Schneider. But then he unexpectedly spared one more: Schneider. That left only women in the bottom five to dance for their lives, with Glaser ultimately going home. The only two women in the entire competition who were safe were R&B singer Tinashe and “Harry Potter” actress Evanna Lynch.

SEE‘Dancing with the Stars’ Premiere Night 2 recap: Who was the first celeb eliminated at the end of the 2-night event? [UPDATING LIVE BLOG]

It wasn’t a matter of dance quality. When you average the judges’ scores from Monday night, the men (19.5) weren’t very far ahead of the women (19.14). And one of the women in jeopardy, Alexis Ren, had the fourth highest judges’ score on Monday (21), but she was still overtaken by lower-scoring men in the final accounting (even the lowest scoring contestant, Joe Amabile), so it all came down to popularity — or a lack thereof.

Was this just an anomaly, or are women always disadvantaged on “DWTS”? Well, the latter doesn’t seem to be the case: out of the 26 past winners of the Mirror Ball Trophy, exactly half of them (13) were women. Second and third place finishes are split almost right down the middle too: 25 out of 52 non-winning “DWTS” finalists have also been women. So perhaps the producers this year just picked unlucky female celebs without highly motivated fan voters.

Then again, after seeing five female celebs perform twice to prove their mettle, including the show’s first blind contestant, maybe fans will come out in force in later weeks. Like the classic quote says, “Ginger Rogers did everything Fred Astaire did, except backwards and in high heels.”