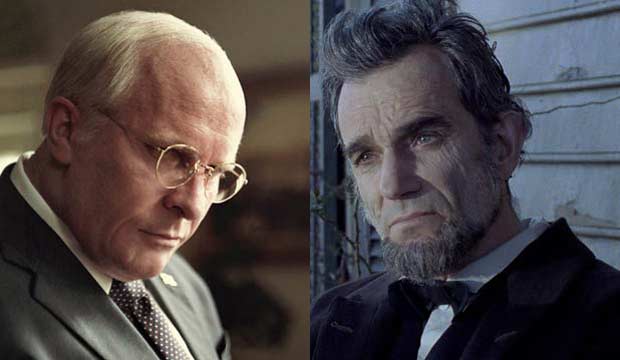 The first rule about “Vice” is that I can’t reveal much about “Vice” right now, which opens on December 25. There is a massive wall of an embargo in place that I shall not cross. But I will tell you about a thought that floated  through my mind multiple times while watching Christian Bale’s transfixing transformation into the venomous, vile and wholly reprehensible political animal known as Dick Cheney.

I don’t feel so bad about Daniel Day-Lewis retiring from acting anymore.

What this 44-year-old Welsh-born Englishman does in “Vice” is the towering equal of Day-Lewis’ Oscar-winning role as Abraham Lincoln – save for the fact that, instead being inspired, one leaves Bale’s biopic with an overwhelming dread that our country’s ideals that were endangered during the George W. Bush era continue to be put through the shredder.

As for his acting, Bale pulls off quite a feat. Yes, his shape-shifting into an older man with a bad ticker required growing a sizable pot belly, turning his thick dark mane into gray straw and sporting so many liver spots, he looks like a rancid mound of chocolate chip cookie dough.  But the true genius of his performance is his mastery of threatening silence. There is a bathroom scene where his PJ-clad Cheney brushes his teeth and then gargles mouthwash for several minutes and it is, I swear, utterly thrilling.

But I must not reveal more. Instead, I will make a case for why Bale, even though he already has a supporting Oscar for his rail-thin crack-addict boxer Dicky Eklund in 2010’s “The Fighter” and nods for his work in 2013’s “American Hustle” and 2015’s “The Big Short,” is not just worthy  but is overdue for a lead actor statuette this year.  Day-Lewis, 61, might be the greatest actor of his generation. But you can make that same case for Bale, judging  from his career trajectory. Let’s compare these two major talents, who are dedicated to fully immersing themselves into their roles, have in common work-wise.

*Breakout role. Day-Lewis has received six Oscar nominations, three of which turned into wins. But his first role was an uncredited one as a child vandal in 1971’s “Sunday Bloody Sunday,” in the year Bale was born. The part that put him on the map arrived in 1985, Stephen Frears‘ “My Beautiful Launderette,” as a charismatic gay street punk.  Bale was spied by no less than Steven Spielberg in a 1986 NBC miniseries, “Anastasia: The Mystery of Anna.”  The director would cast him as a child of privilege living in Shanghai in 1941 who is placed in a prison camp after the Japanese invade during World War II in 1987’s “Empire of the Sun.”  The teen novice earned several juvenile acting awards, including one from the National Board of Review.

*Both did musicals and suffered a rare flop. Day-Lewis starred as as a film director juggling the women in his life in 2009’s “Nine,” a musical based on Federico Fellini’s film “8-1/2” that was a Broadway success. But its appeal  got lost in translation on the way to the big screen. Bale starred in an original  1992 Disney musical-comedy “Newsies,” featuring  turn-of-the-20th-century paper boys in New York City who sang and danced while on strike. It bombed when it first came out, but gained a cult following on home video. “Newsies” was turned into a Broadway hit in 2012 and was nominated eight Tonys, winning two.

*Both played real-life boxers. Bale’s pugilist in “The Fighter” is past his prime due to a drug problem and acts as a trainer for his half-brother when he isn’t getting in trouble with the law. Basically, the actor got in shape for the role by shedding pounds and trying to think like his somewhat addled character. Day-Lewis starred as Irish fighter and imprisoned IRA volunteer Danny Flynn in 1997’s “The Boxer.” He pulled no punches when it came to prep, boxing and training for a full three years.

*They each embodied brutal human monsters. Day-Lewis was scarily persuasive in his Oscar-nominated role as sadistic street-fighter Bill the Butcher in Martin Scorsese’s “Gangs of New York” in 2002. He even went so far to emulate the real-life one-eyed murderer by covering up his own eye with prosthetic glass. He refused to break character during filming and maintained his accent. In 2000’s “American Psycho,” Bale is Patrick Bateman, a slick wealthy investment banker whose outward swagger allows him to be a sadomasochistic and self-involved sociopath who seemingly gets away with murder. The actor maintained his American accent during filming and spent hours at the gym and with an on-set trainer to maintain a buff physique.

*They both played romantic action heroes. In 1992, Day-Lewis took on a literary version of a Colonial-era American do-gooder in Michael Mann‘s “The Last of the Mohicans.”  He takes the form of James Fenimore Cooper’s Hawkeye, the white adopted son of a Mohican chief who falls for a British Army major’s daughter and fends off the villainous Magua from going after his love and her father and sister. Day-Lewis prepped for his first big budget film by residing in the wilderness and living off the land much as his character would have. In 2005, Bale donned the Caped Crusader’s cowl in “Batman Begins,” successfully reviving the superhero franchise with a darker tone provided by director Christopher Nolan.  By day, he is rich playboy Bruce Wayne. But by night, he turns vigilante in order to retaliate for the murder of his parents. His love interest and childhood pal, Rachel, is a Gotham assistant district attorney who can’t abide by Wayne’s dark alter-ego.

Here is hoping that Bale doesn’t follow in Day-Lewis’ footsteps and walk away from acting anytime soon. At least not before he finally claims a lead Oscar or two.