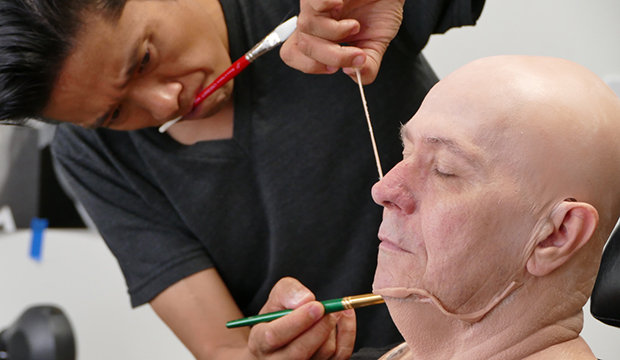 “Darkest Hour” is as much of a lock to win the Best Makeup and Hairstyling Oscar as it is to claim Best Actor. Those uncanny prosthetics to transform Gary Oldman into Winston Churchill didn’t create themselves, you know? If the film does take home Best Makeup and Hairstyling, Japanese makeup wizard Kazuhiro Tsuji, who was retired two years ago until Oldman came calling, would be the first Asian person to win the category.

A three-time nominee, Tsuji, who shares his nomination with David Malinowski and Lucy Sibbick, is the only Asian makeup artist ever nominated in the category. He was previously up for “Click” (2006) and “Norbit” (2007), and won a BAFTA for “Dr. Seuss’ How the Grinch Stole Christmas” (2000).

Tsuji, whose resume includes “Men in Black” (1997), “Planet of the Apes” (2001) and “The Curious Case of Benjamin Button” (2008), actually retired from film to focus on fine art and sculpting after completing work on “Looper” (2012). Oldman met Tsuji when he was in discussions for Tim Roth‘s role in “Apes” and was so impressed by him that he convinced Tsuji to come out of retirement to work his magic to turn him into Churchill. The actor has said he wouldn’t have taken the role without Tsuji on board. And now they both might have golden statues for it.

Though Tsuji and Oldman’s relationship is nowhere near as long, they call to mind another duo from a film about a British prime minister where the makeup effects were as integral to the transformation as the performance: Meryl Streep and her longtime makeup artist J. Roy Helland from “The Iron Lady” (2011). Both won Oscars; Helland shares his with Mark Coulier.