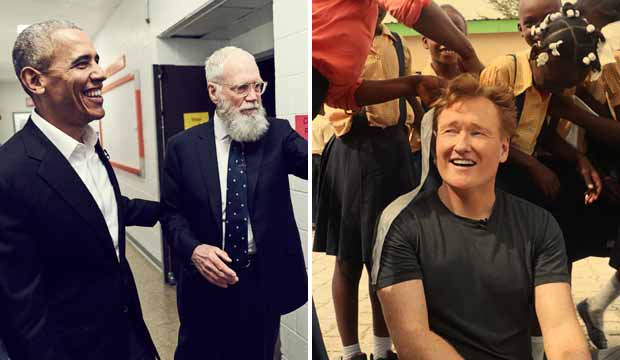 David Letterman and Conan O’Brien are best known for their work as talk show hosts. In fact, they got their start on the same talk show: Letterman created NBC’s “Late Night” in 1982, and O’Brien took over the show in 1993 after Letterman left to host “The Late Show” on CBS. But now both comedians are venturing into new territory at the Emmys. They’re both contenders for Best Informational Program.

Letterman is on the ballot for his new Netflix series “My Next Guest Needs No Introduction,” which premiered in January 2018. It comes three years after he retired from late-night TV and establishes a new format. As opposed to his previous series which ran every night, the first season of “My Next Guest” consisted of just six episodes, which were released monthly. Each episode features an in-depth conversation with just one person as well as on-location field segments. Those six guests were indeed impressive: President Barack Obama, actor George Clooney, Nobel laureate Malala Yousafzai, rapper Jay-Z, comedian Tina Fey and radio host Howard Stern.

Meanwhile, O’Brien went on-location for special episodes of his self-titled TBS talk show known as “Conan Without Borders.” It has been entered separately for Best Informational Program this year, in addition to the main “Conan” series being submitted for Best Variety Talk Series as usual. In this third season of “Without Borders” O’Brien visited Israel, Haiti and Italy for shows that follow the format of comedic travelogues as opposed to a traditional talk show.

In this late-night era when comedians like John Oliver and Samantha Bee are blurring the lines between humor and journalism it’s perhaps no surprise to see two of TV comedy’s longest-serving veterans exploring new avenues and interests. Now they could win new Emmys too.

But “My Next Guest” and “Conan Without Borders” face stiff competition from the defending champ, “Leah Remini: Scientology and the Aftermath,” and four-time winner “Anthony Bourdain: Parts Unknown” (2013-2016), which may be the sentimental favorite following Anthony Bourdain‘s shocking death by suicide on June 8. Do you think O’Brien and Letterman will break through with nominations? And will one of them win?