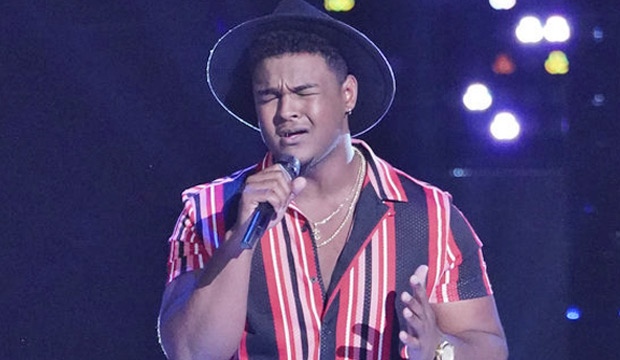 During Monday’s episode of “The Voice,” Adam Levine paired up DeAndre Nico and Jake Wells in the latest knockout round of Season 15. DeAndre sang Hunter Hayes‘ “Wanted” in front of the four reality TV coaches while Jake blew the roof off of Coldplay‘s “Yellow.” After a short deliberation Adam decided to keep DeAndre, noting that “this dude came to win!” None of the other three coaches — Blake Shelton, Jennifer Hudson or Kelly Clarkson — opted to steal Jake for their teams, so he was sent home. Read the coaches’ comments below.

“First of all Jake, you gotta be so happy with what you just heard from Kelly,” Adam told Jake after Kelly raved that she loved his rendition of the Coldplay classic. “When we just started doing it, it was literally exactly the same as the record. I was just like, we gotta make it more you. I really appreciate that you were willing to go with me on that journey. That’s a testament to it worked, you know?”

Adam continued, “And DeAndre, this dude like came to win! It’s like the ultra competitor but also super kind, super humble, and on top of it, such a crazy bonkers singer with I think one of the richest and best tones. No one sounds like you, DeAndre. I could pick you out of a hundred thousand singers. The winner of this knockout is DeAndre.” As DeAndre celebrated, Jake thanked everyone for the experience and then left the stage.

SEEBlake Shelton names Dave Fenley the winner of ‘The Voice’ knockouts, but who swoops in to steal Kameron Marlowe? [WATCH]

In his “The Voice” live blog, our recapper John Benutty had this to say about the knockout: “Staying on the keyboard throughout his performance, Jake succeeded in making an iconic song sound both familiar and new, but where the original song soars he never managed to reach its height. On the other hand, DeAndre ran with the advice he was given and let the quieter moments of his song speak as loudly as the big ones. The coaches thought Jake did a decent job, but insinuated that he may have been outmatched by the song. Before choosing him to remain on his team, Adam said that DeAndre ‘came to win’ and complimented his tone. It’s no surprise he’ll stick around because he is one of Adam’s strongest vocalists.”