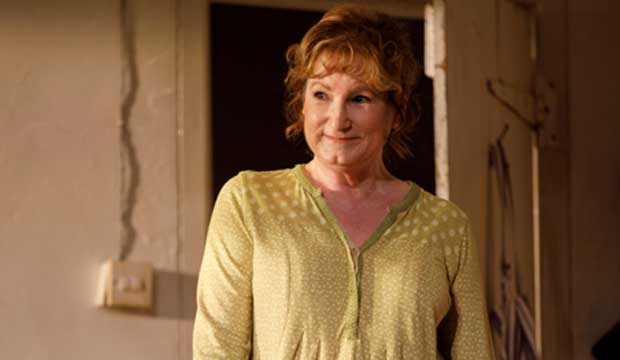 Apocalyptic wastelands aren’t often presented on Broadway stages, but Lucky Kirkwood’s “The Children” presents audiences with life in the countryside after a nuclear fallout. Unlike most end-of-the-world dramas, this play stays indoors and focuses on the inhabitants of a seaside cottage. It’s the intense focus on character that provide Deborah Findlay the opportunity to score a Tony Award nomination for Featured Actress in a Play.

Findlay portrays Hazel, a retired nuclear physicist. She lives with her husband Robin (Ron Cook) in a run down cottage just outside the “exclusion zone,” the area ravaged by earthquakes, tidal waves, and radiation after the power plant which employed the couple experienced a Fukushima like disaster. She has settled nicely into a hippie-fied retired life, full of yoga and living off the land, when an old friend and co-worker Rose (Francesca Annis) appears after a 38-year absence.

Rose’s sudden resurgence shakes Hazel. For one, Hazel thought Rose was dead. But more pressing is that Rose once had an affair with Robin. Throughout the evening, Hazel observes how disturbingly familiar Rose is with the cottage and how friendly her husband still acts towards his old flame. As if the drama of this resurrected romance isn’t enough, Rose unveils a secret agenda as she tries to convince the couple to go to work cleaning up the nuclear plant. They would succumb to radiation poisoning in the process. This prospect challenges Hazel’s core ideals as she questions what responsibility she has to herself, her children, and the world she will leave behind.

Findlay’s intricate character work as Hazel is a marvel to behold. It’s a performance of thrilling economy, alternating between earnest showcases of affection and acts of desperation. She also showcases her strength as both a comedic and dramatic performer, contemplating the meaning of life one minute and eliciting belly laughs at an extended bathroom joke the next. Though the cast is just three members strong, Hazel is the fulcrum of every situation. A role like this with tons of stage time and high drama tic stakes makes her formidable in the Featured Actress in a Play category. There would have been enough material here to bump her up to lead.

Tim Teeman (Daily Beast) loved Hazel, “who Findlay plays with a sharp, nervy intensity.” Charles Isherwood (Broadway News) notes that “Findaly’s Hazel moves with a bustling, slightly disorderly warmth, with both a welcome and an anxious question mark in her chipper tone.” Impressed with a comedic bit where salad preparation becomes something of an act of war, Marilyn Stasio (Variety) claims: “Findlay, a National Theatre stalwart featured in the original local production of “Top Girls,” gives Hazel a will of steel. While projecting the appearance of unwavering control, she hacks the hell out of a defenseless salad she’s preparing for dinner. You really don’t want to turn your back on her when she’s got a knife in her hand.”

Interesting that Stasio mentions “Top Girls,” which is Findlay’s claim to fame on this side of the pond. The style of “The Children” drew some comparisons to that of “Top Girls” playwright Caryl Churchill. Coincidentally, Churchill debuted a new work this season (“Escaped Alone”) which also featured Findlay as a retiree staring down an apocalypse.  Besides having a stranglehold on middle aged apocalypse dweller roles, the increased exposure to New York audiences could help Findlay’s Tony chances, since she mostly performs in the UK. Her only other Broadway appearance is 1997’s “Stanley,” for which she won an Olivier and Outer Critics Circle Award.

The biggest obstacle toFindlay’s Tony chances is the sheer breadth of competition for Featured Actress. Noma Dumezweni (“Harry Potter and the Cursed Child”) and Denise Gough (“Angels in America”) already won Olivier awards for the London run of their plays. And if Tony nominators love “Angels in America” there are two other actresses from that play alone to fill out the category. Past Tony winners Laura Benanti and Laurie Metcalf are also in the mix. Findlay even has to compete with her co-star Francesca Annis, since the entire cast of “The Children” was deemed eligible in the Featured acting categories.