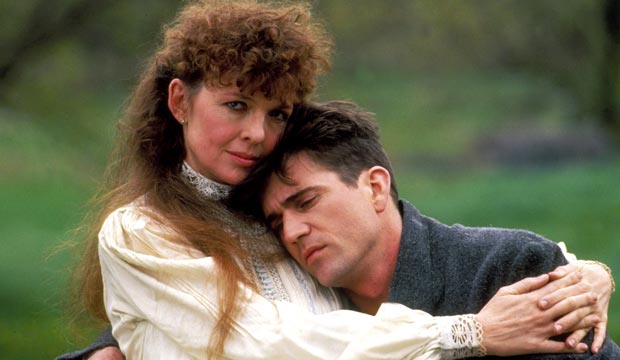 Diane Keaton is one of those special actors who can shift from comedy to drama without missing a beat. She has been nominated for two Oscars in comedy (“Something’s Gotta Give” and winning for “Annie Hall”) and two in drama (“Reds” and “Marvin’s Room”). Keaton is now back in theaters joining Oscar winners Jane Fonda and Mary Steenburgen, as well as five-time Emmy Award winner Candice Bergen in Bill Holderman‘s comedy “Book Club.”

A recipient of the 2017 American Film Institute life achievement award, Keaton has also been nominated for eight Golden Globes for her work in film, winning two (for “Annie Hall” and “Something’s Gotta Give”). In recognition of her current film, let’s take a photo gallery tour of her 15 greatest performances, ranked from worst to best.

15. MRS. SOFFEL (1984)
This film offered Keaton a juicy leading role as the repressed wife of a prison warden (Edward Herrmann) who visits the prisoners to read Scripture to them. When she meets the Biddle brothers — Ed (Mel Gibson) and Jack (Matthew Modine) — she falls in love with the dashing Ed and plans his escape so that they can run away together. For her performance as Kate, Keaton earned her fifth Golden Globe film nomination.

14. BABY BOOM (1987)
In this comedy, Keaton portrays J.C., a workaholic career woman who inherits from her late cousin a 14 month-old toddler to whom she surprisingly becomes attached. When she becomes determined to raise the child and continue her work life, her husband walks out on her, leaving J.C. with no choice but to face up to the challenge of juggling her two new worlds. For her performance as J.C., Keaton earned her sixth Golden Globe film nomination.

13. FATHER OF THE BRIDE (1991)
In the remake of the 1950 comedy, Keaton is the corresponding mother of the bride, annoyed that her husband (Steve Martin) is not accepting of his daughter’s groom simply because he does not want his little girl to ever leave him. Although she has a familiar wife role, Keaton puts a little spin on it with her interactions with Martin, two great comic actors hoping to lift the material. And they do.

12. MARVIN’S ROOM (1996)
“Marvin’s Room” is one of several theatrical adaptations in which Keaton has co-starred. Here she plays Bessie, a woman who has been caring for her ailing father who learns that she herself has leukemia and needs a bone marrow transplant. She turns to her selfish sister (Meryl Streep) and her mentally-unstable nephew (Leonardo DiCaprio) for help. Keaton was nominated for her third Oscar and her second Screen Actors Guild Award.

11. THE FIRST WIVES CLUB (1996)
I don’t think that anyone can make a case for “The First Wives Club” as a great film, but as one of Keaton’s biggest hits ($181 million worldwide), it is undeniably a romp for three great comic actresses. Keaton joins Bette Midler and Goldie Hawn as three wives who have been jilted by their husbands, who have left them for younger women. And these three want revenge.

10. CRIMES OF THE HEART (1986)
Based on Beth Henley‘s Pulitzer Prize-winning play, “Crimes of the Heart” focuses on the reunion of three sisters — Lenny (Keaton) who reliably complains about her shriveled ovary, Meg (Jessica Lange) who returns home knowing that her once dazzling career is over, and Babe (Sissy Spacek), who has just happened to shoot her husband. Keaton is solid in a role that is surprisingly frumpy, and she makes the most of that image change.

9. LOOKING FOR MR. GOODBAR (1977)
If you never caught “Looking For Mr. Goodbar” at the time, chances are you haven’t seen it, because the Richard Brooks film has never been released on Blu-ray or DVD. Still, it marks one of Keaton’s best performances as a bar-hopping schoolteacher who winds up with the wrong man and is murdered.

8. PLAY IT AGAIN, SAM (1972)
“Play It Again, Sam” is one of the few Woody Allen-written properties to ever be directed by someone else. But in the assured hands of Herbert Ross, the final product turned out just fine. It marked the first collaboration of Allen and Keaton, a fruitful collaboration that endured for the next 21 years.  Here Keaton plays Linda, the wife of the best friend of Allan (Allen), who develops feelings for her even though both know that the relationship is doomed.

7. SHOOT THE MOON (1982)
When she accepts dramatic roles. Keaton appears to be attracted to women in dysfunctional relationships, and so it is here with her Faith, who must deal with her cheating husband (Albert Finney) and the need to explain his infidelity to her children. Keaton makes the most of Bo Goldman’s powerful script as a character who needs to find the way to move on with her life after devastating news.

6. LOVE AND DEATH (1975)
Allen’s satire of Russian literature is absolutely ridiculous and absolutely wonderful. Here Keaton plays Sonja, cousin twice removed from noted coward Boris (Allen) during the Napoleonic Wars. She marries Boris and aims to start a family, but when Napoleon’s invasion of Russia gets in the way, she concocts a plan to assassinate the diminutive leader.

5. SOMETHING’S GOTTA GIVE (2003)
“Reds” co-stars Keaton and Jack Nicholson reunite for this romantic comedy by Nancy Meyers. Music mogul Harry (Nicholson) is dating Marin (Amanda Peet), a much younger woman who takes Harry to her family’s home in the Hamptons where he runs into Marin’s playwright mother Erica (Keaton). And one thing leads to another. For her performance as Erica, Keaton won her second Golden Globe film award and earned her fourth Oscar nomination and her third SAG film nod.

4. MANHATTAN (1979)
In one of Allen’s greatest films, Keaton plays Mary, the mistress of college professor Yale (Michael Murphy) who is the best friend of TV writer Isaac (Allen). Isaac is dating 17 year-old Tracy (Mariel Hemingway) but finds himself drawn to Mary, an attraction that does not end well for either Isaac or Mary.

3. REDS (1981)
Warren Beatty‘s epic film about the Russian Revolution gave Keaton the plum role of the real-life Louise Bryant, a feminist journalist whose support of the Bolsheviks was a key PR tool in the fight. Bryant becomes romantically involved with journalist John Reed, but in his absence, she begins an affair with noted playwright Eugene O’Neill (Nicholson). For her performance, Keaton received her second Academy Award nomination and her third Golden Globe nod.

2. ANNIE HALL (1977)
Keaton could cure cancer, but what she’ll be remembered for will be “Annie Hall.” Her iconic performance as the “la-dee-da” girlfriend of comic Alvy Singer (Allen), with whom Annie cooked lobsters, played tennis and fell in love holds up splendidly even today.  eaton initially disarms the audience with her Annie, then draws us in as the character becomes more complex.  For her performance as Annie, Keaton won the Academy Award as Best Actress, as well as her first Golden Globe film award.

1. THE GODFATHER Series (1972, 1974, 1990)
Yes, when we think of the modern masterpieces of “Godfather” I & II, we primarily think of Marlon Brando and Al Pacino. But the next time you come upon these films, watch Keaton. In the first film, her Kay Adams is our entryway into the strange world of the Corleone family. One can’t help but sympathize with Kay when she maintains that Michael is good, Michael is decent, Michael is not like them. Until he is. The look on Keaton’s face when Michael shuts the door on her is arguably the most devastating moment in the “Godfather” canon.