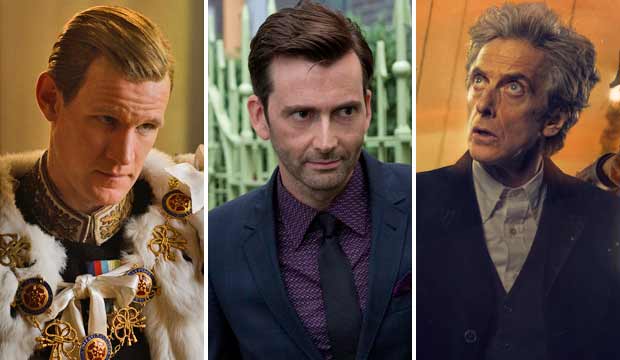 Emmy voters have never taken to the long-running British sci-fi series “Doctor Who,” which at 55-years-old is only 15 years younger than the Emmys themselves. Of course, much of that is because of geography. There hasn’t always been much interest in or access to “Who” on this side of the Atlantic, and Emmy rules require that a program at least be an American co-production to qualify. But this year the television academy can make up for lost time by nominating not one, not two, but three Doctors who are on this year’s ballot.

The Doctor is a time-traveling alien who has lived for thousands of years and periodically changes form. This year the 10th (David Tennant), 11th (Matt Smith) and 12th (Peter Capaldi) iterations could contend, though only one of them is on the ballot for actually playing the Doctor. Capaldi is in the running for Best Movie/Mini Actor for “Twice Upon a Time,” the Christmas special episode of “Who” in which he left the role by transforming into Jodie Whittaker.

Tennant is already a Daytime Emmy winner: he prevailed in 2013 for his voice-over performance as the droid Huyang in “Star Wars: The Clone Wars.” But he has never contended at the Primetime Emmys. This year is his second chance to be nominated for his role as the evil Kilgrave in Netflix’s “Jessica Jones.” He was eligible in 2016 as a supporting actor on the show, but he was killed off at the end of season one, and he appeared only briefly in season two this past spring. So now he’s hoping for a nom for Best Drama Guest Actor for his return engagement.

Smith is probably the likeliest of the three Doctors to score an Emmy bid this year. After he left “Doctor Who” he joined the cast of “The Crown” as Prince Philip, the husband of Queen Elizabeth II (Claire Foy). Unlike “Doctor Who” and “Jessica Jones,” “The Crown” has already established itself as a major awards player.

In 2017 “The Crown” won 3 Emmys out of 12 nominations, including Best Drama Supporting Actor for John Lithgow. Smith wasn’t nominated then, but he was competing as a lead actor at the time. This year he’s in the supporting category, and with Lithgow no longer on the show Smith could slide right into that open slot. As of this writing he’s an underdog based on our racetrack odds, but 2 of the 19 Expert journalists we’ve polled think he’s getting in: Pete Hammond (Deadline Hollywood) and Anne Thompson (IndieWire).

How many Doctors do you think will get the nod from the television academy when nominations are announced on July 12? Or will the time-traveler have to wait another year?