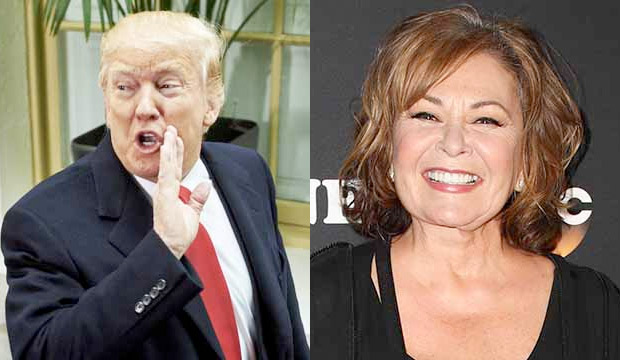 President Donald Trump was one of the first people to learn about the impressive ratings of ABC’s “Roseanne” reboot, thanks to a phone call from an old friend. “I got a call from Mark Burnett — he did ‘The Apprentice,’ he’s a great guy,” Trump told supporters at an infrastructure speech in Cleveland, Ohio, just one day after Roseanne Barr‘s working class sitcom made its triumphant return. Trump continued, “[Mark] said, ‘Donald, I called just to say hello and to tell you, did you see ‘Roseanne’s’ ratings?’ I said, ‘Mark, how big were they?’ ‘They were unbelievable. Over 18 million people.’ And it was about us! The fake news hasn’t quite figured it out yet. But they will. And when they do, they’ll become much less fake.”

The first episode focused on the very real political feud between the main character of Roseanne Connor and her sister Jackie Harris (Oscar nominee Laurie Metcalf). Roseanne, it turns out, is an ardent Trump supporter while Jackie, donning a pussy hat and a “Nasty Woman” shirt, supported Hillary Clinton‘s 2016 presidential bid. The alphabet network was so impressed with the revival that it’s already renewed the sitcom for a 13-episode second season.

While Burnett has stayed mostly quiet about his political views, many people consider his reality TV show “The Apprentice” to be one of the main reasons that Trump is sitting in the oval office today. “Many have asked, who is to blame for Donald Trump? And I’ll tell you who. He’s sitting right there,” Jimmy Kimmel infamously pointed out when he hosted the 2016 Emmys on ABC. “That guy. Mark Burnett, the man who brought us ‘Celebrity Apprentice.’”

Throughout its original nine-season run on ABC “Roseanne” won four Emmy Awards, all in the acting categories: Best Comedy Actress for Roseanne Barr (1993) and Best Comedy Supporting Actress for Laurie Metcalf (1992-94). The show was never nominated in the top Emmy category of Best Comedy Series, but all of that could change this year as one of our Expert journalists — Matthew Jacobs (HuffPo) — predicts that the “Roseanne” curse is about to be broken.